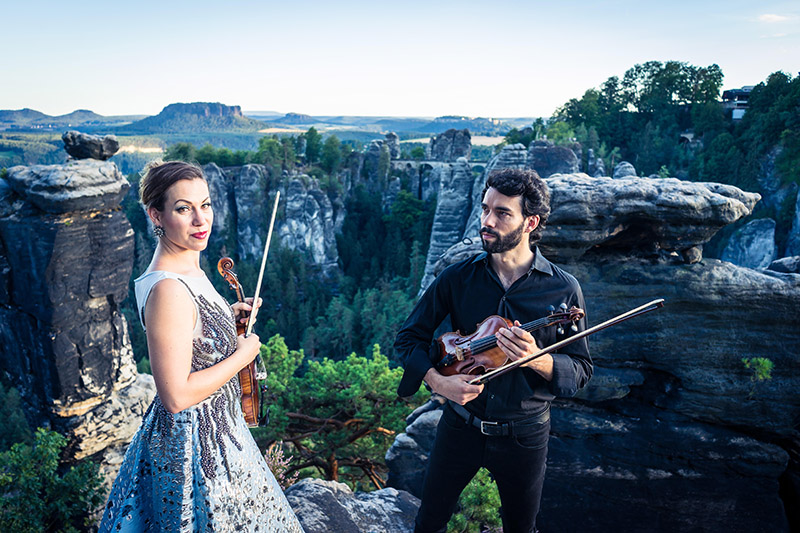 “They represent the young and wild in the era of progressive, but classically oriented violin music.” (Nordbayerischer Kurier)

“The sibling-duo Marie-Luise and Christoph Dingler dare to reduce a work to only eight strings (two violins or violin plus viola). But it is often the reduction that brings out the structure of music especially beautifully.” (Giessener Zeitung)

The Twiolins are a violin duo from Mannheim that is always exploring new paths: “As an artist, it is vital to nurture the dialogue with your inner child and to always be guided by your imagination and a child-like curiosity,” say Marie-Luise and Christoph Dingler about their joyous affirmation of their musical spirit of adventure.

The siblings, who have been making music together since their childhood, have even performed with a beatboxer. And since they initiated the Progressive Classical

Music Award in 2009, they have been encouraging others to be more audacious.

On their newest album Eight Seasons. Evolution, with works by Antonio Vivaldi and Astor Piazzolla, they now seek to discover the new in the old.

Antonio Vivaldi’s world-famous cycle of solo concertos is often being combined with the lesser known Four Seasons by Astor Piazzolla, starting with Gidon Kremer and his Eight Seasons. The Twiolins go a step further by connecting individual movements by Vivaldi with a Piazzolla-Tango. It is precisely this new way of playing on Eight Seasons. Evolution, which on this CD unearths fascinating parallels and suspenseful transitions and alternations, and at once, it creates an overarching organization despite all its variety. Marie-Luise and Christoph Dingler broke with hierarchy in a different sense, as well: out of the orchestral movements of their originals, they have crystallized the musical essence in a way that allows for a noble rivalry between “only” two violins.

The connections between the different compositional styles of Vivaldi and Piazzolla did not just build themselves, however. Christoph Dingler especially invested in meticulous and detailed preparation work. This included the study of lesser-known tangos by Piazzolla. To create a properly functioning piece, the ornamentation and rhythmic structure of each piece had to be captured delicately and combined intelligently. Through the confrontation with Piazzolla’s tango-dictus, Vivaldi’s concert movements gain even more weight in their expressiveness. At the same time, the immediate comparison to Vivaldi brings out the baroque affinity in its logic more clearly.

Marie-Luise and Christoph Dingler grew up in a musical family. Their grandfather was a capellmeister, their mother a cantor and harpsichordist. The siblings have been listening to Vivaldi and Piazzolla since their childhood, and Gidon Kremer’s recording of Eight Seasons was also frequently played. Accordingly, the artful idealism of the legendary Latvian violinist was a crucial initial inspiration for Marie-Luise and Christoph Dingler.

Both studied at the conservatory in Mannheim, have won many prizes and tour domestically and internationally. As soloists, they have performed with the Deutsche Radio-Philharmonie, Philharmonie Baden-Baden, the Brandenburgisches Staatsorchester and the Württembergisches Kammerorchester, and have also performed on radio and television. In the year 2009, they initiated the Progressive Classical Music Award, which focuses on new repertoire for two violins. In 2012, they were awarded the Helene-Hecht Prize. Out of the laureate works developed the CD Virtuoso in 2011, followed by Sunfire in 2014. In 2017, they released the album Secret Places, which, just as recently Eight Seasons. Evolution, was awarded the silver medal at the Global Music Awards.