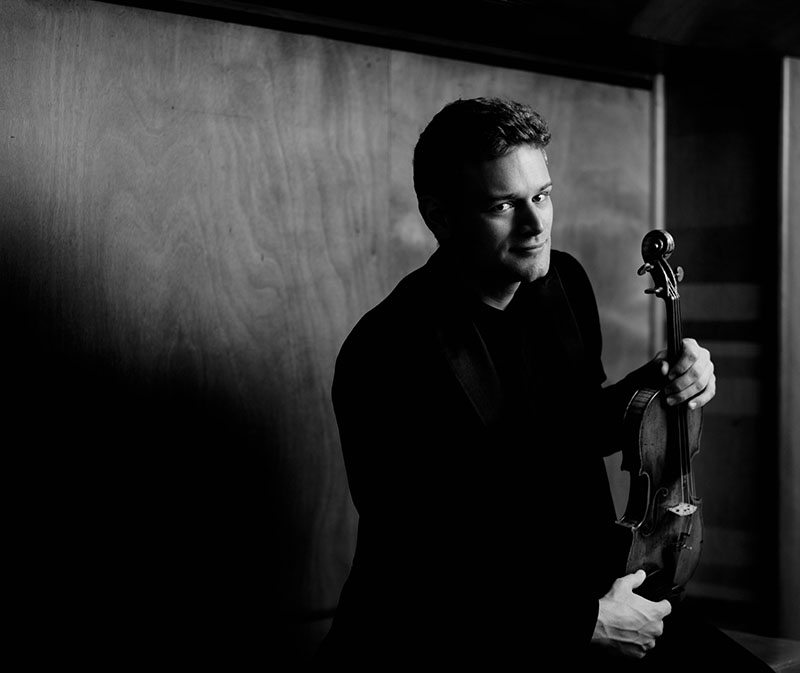 Mozart to the power of two

Known or unknown, new or old: Sebastian Bohren dives deeply into the musical substance and transmits it to us with a freshness and liveliness that is second to none. His repertoire includes a multitude of rarely heard works that are worth discovering. Nevertheless, he always returns to the standard repertoire, from which he every time is able to extract new nuances, giving it its pristine character. „Tones of mature elaboration and sensual beauty“ (Pizzicato Magazine, 2019) determine his playing, whose shaping is characterized, among other aspects, by „well-dosed vibrato, sensitive to subtle shades, with a tone and expression that pushes the limits, yet is unpretentious“ (NDR Kultur, 2019). Now Sebastian Bohren turns to Mozart, for him „the greatest musical talent that ever lived.“ The apparently ease and light-heartedness, coupled with Mozart‘s musical precociousness, make his violin concertos count among the most demanding pieces in the violin repertoire in terms of musical design. Bohren had to painfully realize this when he listened to his recordings of the concertos in A and G from 2018 and found himself unsatisfied with his own playing. This was especially the case when he compared his efforts to the energy-drenched performance by the CHAARTS Chamber Artists conducted by Gábor Takács-Nagy. After the first Corona lockdown and hungry for music, Bohren made the daring decision to record the violin concertos again, with the same co-musicians and in the same venue.

NO-TE: To repeat a recording after two years is a courageous step. What tipped the scales for this decision?

It was clear to me that I would not compromise on the quality of my work; I had to stay true to my own standards. Putting it all together again was an immensely powerful experience for me. I was deeply touched by how much my decision and my clarity in this regard were immediately understood and supported by my environment, the musicians and a very broad circle of patrons. I would say it was the right time. We were also lucky to be able to gather the same musicians at the same recording location. It was crazy!

NO-TE: How do the recordings of 2018 differ with those of 2020? To what extent have you seen yourself evolve during this time?

In 2018 I was – as I realized in retrospect – not sufficiently prepared violinistically, accordingly the recording was correct but not sufficiently saturated and thus forced to adjust. I knew from my good experiences with Schubert, that Mozart would one day suit me, but did not finish the process towards the pieces at that time. Then, in lockdown 2020, I tackled it with a vehemence that makes me very proud. I can really stand behind the current result: Every bar is played with love.

NO-TE: At your side are the CHAARTS Chamber Artists, an ensemble made up exclusively of distinguished string quartet players. How does this affect the overall sound?

Through a more intensive „listening to each other“: CHAARTS is an ensemble with very strong personalities, which creates profile and benefits the music. Striving for quality in all aspects, this is the focus.

NO-TE: Conductor Gábor Takács-Nagy is a veteran of Mozart performance, which not at least has been captured on numerous CD recordings. What insights does he bring to the music from the podium, and what connection does he have to Mozart?

For me, Gábor Takács-Nagy is a musical phenomenon. He approaches music in an extraordinarily invigorating way, which fits extremely well with Mozart. The musicians are constantly stimulated to tease out Mozart’s twinkle in every accompaniment and every turn. The unpredictable, high-spirited Mozart as we know him from the letters comes alive here. He is not „petrified“ into a monument of beautiful sound, but remains mentally present even over 230 years after his death.