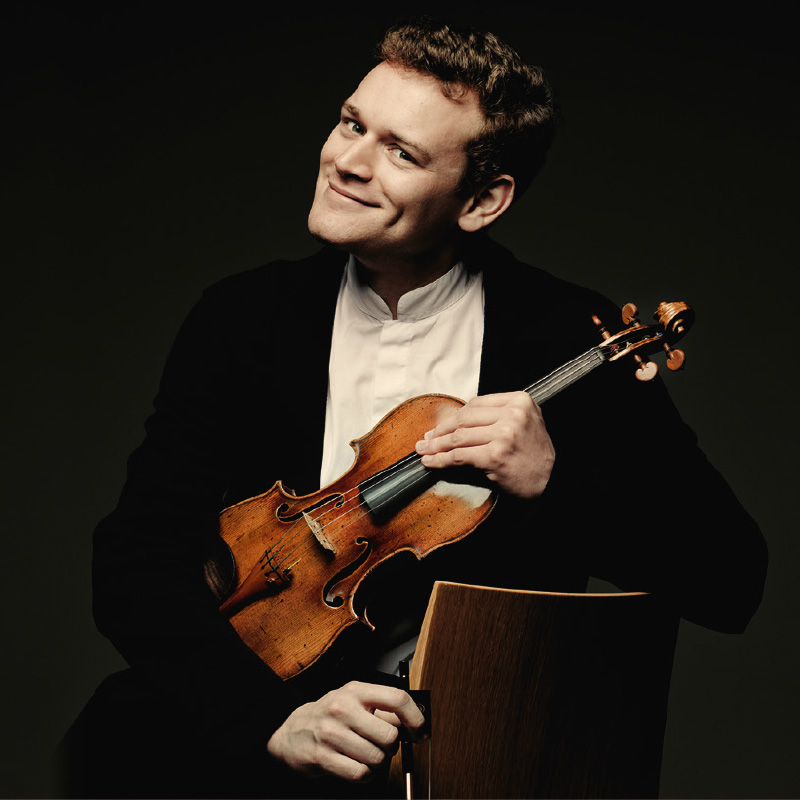 “Bohren has a clarity akin to what in an actor would be called perfect diction, at the service of style and drama.” (The Strad)

“The sound that this young Swiss draws from his Guadagnini violin is full, handsome, in no way turbo- charged and vividly alert to the music’s every shift and turn.” (BBC Music Magazine)

“It felt like I had rediscovered something I had already always known, but which I had forgotten or even lost. It was like a musical rebirth.”

The spark that ignited this realization in Sebastian Bohren came from watching a YouTube video in which the great Ida Haendel is playing an unbelievably virtuosic cadence from Corelli’s La Folia variations, far re- moved from all traditional baroque versions. He developed an entire program structured around the spirit of the Folia, which not only intrigued Corelli, but also such diverse composers as Marin Marais, Alessandro Scarlatti, Francesco Geminiani, Luigi Boccherini and even Rachmaninov. Sebastian Bohren continued to find various pieces in differing qualities. Among others, the recordings include the Violin Sonata in A GT 2.A16, the so-called Pastorale (P.86) written by Guiseppe Tartini and arranged by Ottorino Respighi, and the Violin Sonata in G Minor GT 2.g05. The latter piece came to Tartini in a dream, and it went down in musical history as the sonata with the devilish trill. On the pre- sent album, Sebastian Bohren performs this piece for violine and strings in an arrangement by Ingolf Turban and Holger Frey, with a cadence by Fritz Kreisler. Praeludium & Allegro has only a rather lose connection to Folia. This piece is a variation of a Corelli theme in the style of Giuseppe Tartini. It was written by Fritz Kreisler in the year 1935 – which did not cause a scan- dal at the time, because until the discovery of the true original composer of this work, Tartini was believed to be ist author. The inclusion of Maria Theresia von Paradis Sicilienne into the program is a matter of the heart.

Sebastian Bohren began his musical career as second violin in the Stradivari Quartet. Previously, he was a student of Jens Lohmann, Robert Zimansky, and Zakhar Bron in Zurich, before studying with Igor Karsko in Lucerne and then attending the Hochschule für Musik und Theater in Munich, where Ingolf Turban was his teacher. He received further artistic impulses from Ana Chumachenco, Hansheinz Schneeberger, Dmitry Sitkovetsky, Christian Tetzlaff and Heinrich Schiff. Bohren performs with international symphony and chamber orchestras. Among his chamber music partners are the violinists Daniel Hope, Roby Lakatos, Benjamin Schmid, Hansheinz Schneeberger and Dmitry Sitkovetsky.

quartets and chamber ensembles, soloists, concert masters, and solo winds from leading European or- chestras into their collective. With instrumentations ranging from eight to forty musicians, the ensemble interprets not only classical works but also pop and rock music, tango, and world music – unconditionally and with passion.

Stringendo Zürich brings together established musicians and younger generations of musical progeny. This unification includes shared concert performances, like at the Festival Herbst in der Helferei or the New Years concert in Zurich’s Wasserkitche (“water church”), as well as workshops, rehearsals, and cour- ses with the ensembles of the younger Stringendi. Additionally, they work closely together with mem- bers of the Galatea Quartet and the Swiss Octet. The chamber orchester, based in Zurich, was foun- ded by Jens Lohmann in 1999.