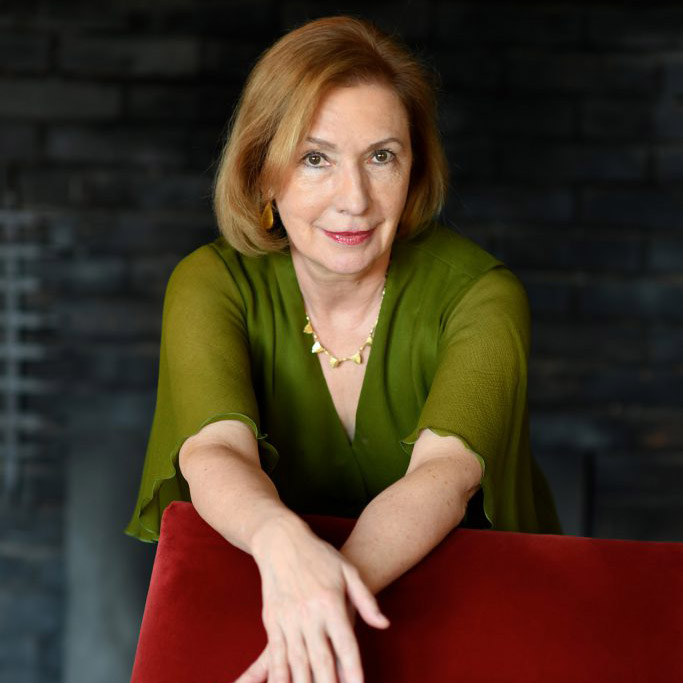 “…fascinates…with her strength in capturing the romantic gesture.” (Piano News)

“Margarita Höhenrieder’s sonorous and colourful playing brings to bear the qualities of Clara Schu-mann’s concerto in particular… Höhenrieder [captivates] by the elegant cantabile phrasing, the round tone and the tranquillity of the voice.” (Fono Forum)

“The memorable playing of Höhenrieder … is beyond reproach. Höhenrieder adopts an approach with an engaging freshness and warmth that feels spontaneous.” (MusicWeb International)

Margarita Höhenrieder is an institution in the German-speaking piano scene. On the one hand as an interpreter whose rare concerts are considered outstanding events. On the other hand as a professor in Munich, where she has been passing on her knowledge to highly talented young musicians since 1991.

Her admiration for the mutual inspiration of Clara and Robert Schumann already led to a recording of the two composers’ piano concertos in A minor in 2002. Now, in the anniversary year of Clara Schumann’s 200th birthday, Margarita Höhenrieder is once again dedicating herself to the congenial artist couple, with piano compositions that she recorded on a Pleyel grand piano from 1850. This not only reflects the spirit of the Romantic era. It also gives an authentic sound testimony of the instruments that the Schumanns played at the time: “I saw this Pleyel as the ideal instrument on which to play the works of Robert and Clara Schumann as authentically as possible while also matching as precisely as possible the exacting demands they place on piano technique. […] I was in search of a convincingly authentic sound for compositions written in and around the 1830s, while also looking out for a suitable performance location” – this Margarita Höhenrieder finally found in a private salon in the Swiss city of Zug.

There she recorded Clara’s highly romantic Trois Romances, Op. 11 from the years 1839–1840, which are dedicated to Robert and represent for Margarita Höhenrieder “nothing less than a declaration of her love for him”. The program is opened, however, by Clara’s Sonata for piano in G Minor, which was most likely unperformed during her lifetime and whose first and third movements she presented to Robert as a gift at Christmas 1841. G minor is also the key of Robert Schumann’s Piano Sonata No. 2. Schumann began the composition in 1833, and it took him many years with a few interruptions. Due to his long struggle for the formal conception of a romantic sonata ‘after Beethoven’ and the complete redesign of the final movement initiated by Clara, the work did not appear in print until 1839 as Opus 22. The colourful collection of the twelve Papillons, Op. 2 emerged from an abundance of early dance-like miniatures by Schumann and arose under the impression of the novel Walt and Vult (Flegeljahre) by the poet Jean Paul, whom he highly esteemed.

Margarita Höhenrieder – a multiple awarded musician and 1st prize winner of the renowned Busoni-Competition 1981 – enjoys a high reputation especially among experts and is regarded as an exceptional pianistic phenomenon. Her mastery is documented on numerous recordings. Margarita Höhenrieder’s concert career has taken her to the world’s great musical centres, where she has worked alongside conductors such as Kirill Petrenko, Claudio Abbado, Lorin Maazel, James Levine, Riccardo Chailly, Fabio Luisi and with orchestras such as the Bamberg Symphony Orchestra, the Symphonieorchester des Bayerischen Rundfunks, the Münchner Philharmoniker, the New York Philharmonic, the Sächsische Staatskapelle Dresden, the Gewandhausorchester Leipzig, the Mozarteum Orchestra Salzburg and the Mahler Chamber Orchestra. The list of her musical partners is long and includes artists such as Kit Armstrong, Julius Berger, Sabine Meyer and Emmanuel Pahud. A close artistic collaboration and friendship also connects her with her former mentor Leon Fleisher and, until his death in 2007, with the contemporary composer Harald Genzmer, who dedicated several of his works to her. Since 1991 she has been a renowned professor at the University of Music and Performing Arts Munich.