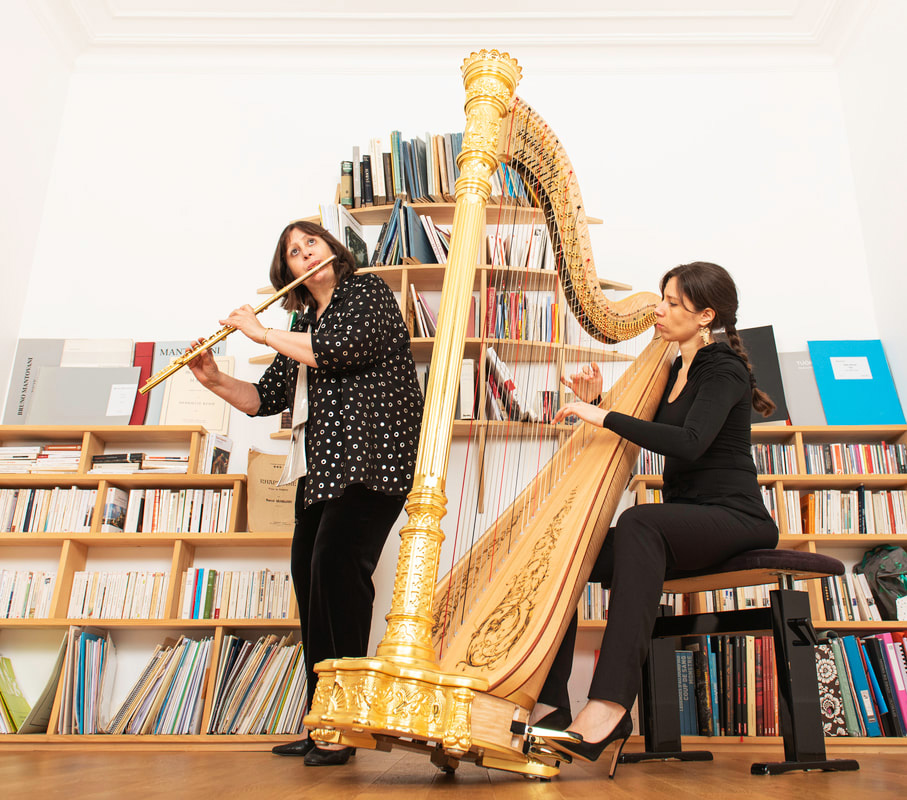 Artistic curiosity is the most important driving force behind the ensemble “Les Connivences Sonores.” For the past seven years, flutist Odile Renault and harpist Élodie Reibod have been digging through the available repertoire on a search for original compositions for their instrumentation. Among works from the first half of the 20th century, they made especially significant discoveries. A distinguished as well as representative selection from this rich treasure trove now crowns their debut CD, recorded with ARS Label.

Odile Renault and Élodie Reibaud found each other and subsequently began playing music together as a duo in the year 2014. Since then, they have been exploring the possibilities of their instrumental combination. Especially important to Odile Renault and Elodie Reibaud are compositions which were explicitly written for their instrumentation, rather than new arrangements of works that were originally composed for other instruments. Given the wide range of musical influences and developments that marked the 20th century, deciding on the final pieces for this recording surely was no easy task to accomplish. The end result is an attractive selection that provides a clear dramaturgy underlying the enjoyable listening experience of this album. Flute and harp venture beyond their commonly assigned roles when Odile Renault and Élodie Reibaud enter into sensual as well as powerful interactions. The shared adventure of these two French musicians gained acclaim even before its realizaition when a successful crowdfunding campaign provided a promising jump start. The production received additional funds through the “Bureau de Classique.”

Claude Debussy was a pioneer when it comes to notions of sound, and that is especially true for harp and flute. Debussy also inspired his compatriot Desiré-Emile Inghelbrecht. His sonata for harp and flute does not deny this stilistic familiarity. It develops an expressive and dynamic rhythm and, through the intense use of chromaticisms, overcomes the conventional boundaries of tonality. Lowell Liebermann, born in New York in 1961, had a credo: new music did not have to be abstract or overly intellectual, and thus also did not have to break with history. In this vein, his sonata from the year 1996 is

colored by chromaticisms and at once very lyrical. It also gives a nod to Dmitry Shostakovich, an idol of Lowell Liebermann’s.

Contemporary art music still does not manage to overcome the imaginary barriers between Occident and Orient often enough. However for the Israeli composer and conductor Ami Maayani, bridging those gaps was a matter of course when he was writing his three arabesques during the year 1973. The second arabesque was composed for harp and flute, and it develops a complex and multilayered approach on the basis of an arabic maqam. A passionate oriential melody ultimately wins the upper hand.

The eight sketch-like pieces from the “Book of Hours” offer a calm anchor in this program. One can hear the composer sharing his “singing” ideal of music-making with the two musicians on this recording. Formally, the “Book of Hours” is structured along a number game modeled after the Christian tradition of a lithurgy of hours. Each number has a corresponding interval – the later the day, the larger the distance between notes. A classically modernist composer has also written for a flute and harp instrumentation: Witold Lutosławski composed music for productions of the Polish broadcasting and radio theater in the early 1950s. Three fragments for this instrumentation survive, which Odile Renault and Élodie Reibaud interpret on their debut album.

then continued her education with Marcel Moyse in the United States. Following her return to France, she became solo flutist in the Ensemble Orchestral de Normandie. Currently, she performs mostly as a chamber musician, playing a wide repertoire that reaches from the 18th century into the present.

Harpist Élodie Reibaud studied at the music academy in Geneva and at the Academy of the Lucerne Festival under the direction of Pierre Boulez. She performs with various orchestras, among them the Strassbourgh Philharmonics, Berliner Symphoniker, and the Basel Symphony Orchestra. She does however have a preference for chamber music.

Ever since they founded their ensemble “Les Connivences Sonores” back in 2014, the two musicians have been driven by their dedication to making (re-)discoveries of original compositions for flute and harp in the chamber music repertoire. At times, they extend their instrumentation to include a viola or a a violoncello, turning their duo into a quintet, and vocals and percussion sometimes also join.