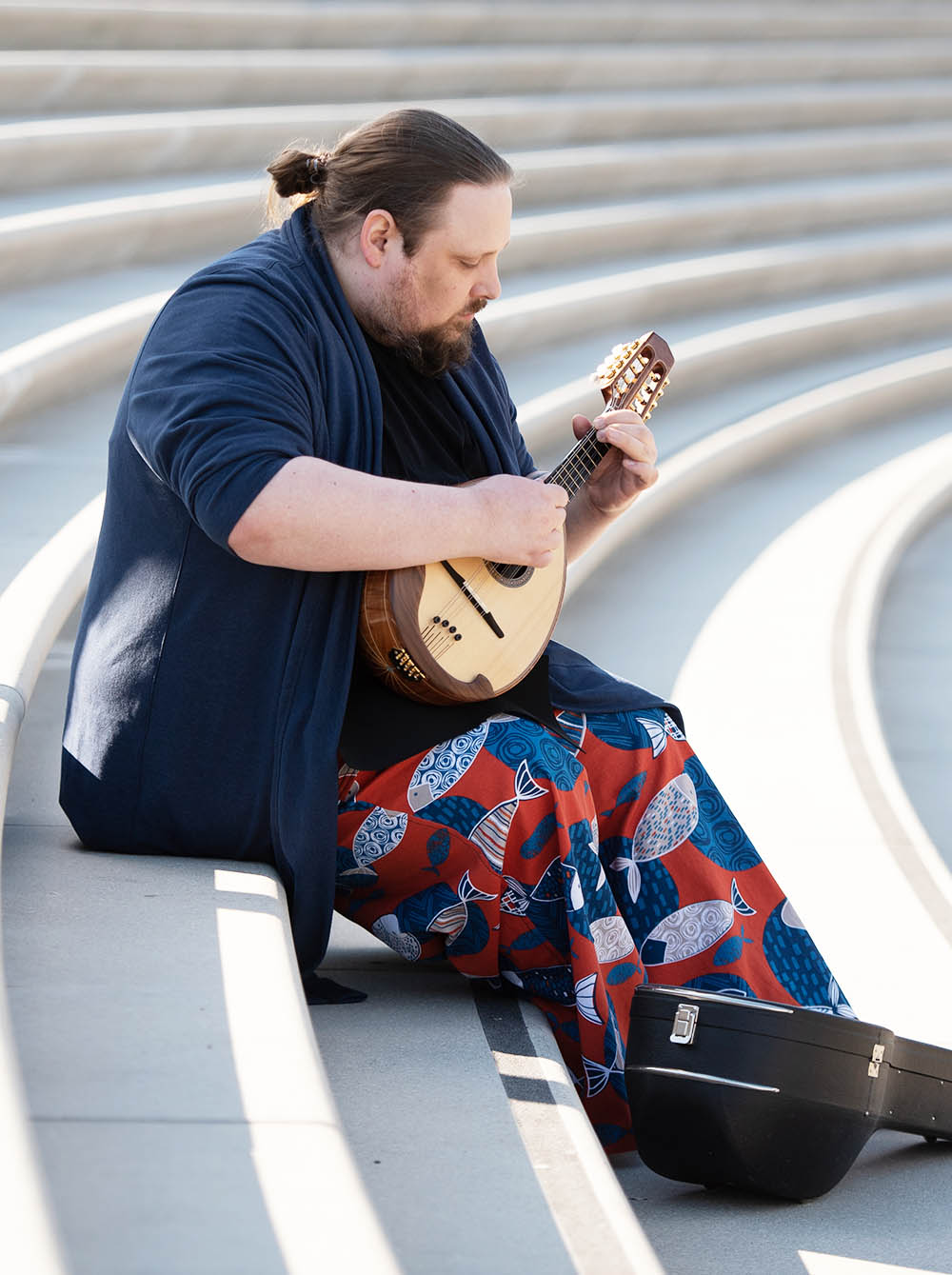 “Albert John Weidt originally composed My Lady Jazz for tenor banjo. In this piece, he perfectly encapsulated the atmosphere of Hamburg’s Reeperbahn. Eyes a-twinkle, the music weaves through the crowded streets. Running into a stranger is no reason for upset but rather a chance to meet someone new.“
Florian Klaus Rumpf

Could there be any more centricity in Florian Klaus Rumpf’s life and music? The new recording by this mandolinist from Hamburg shows him in the thick of things: his instrument, but also the big Hanseatic city in which he lives, are inextricably linked and form the centre of his life. It only makes sense to provide the listeners of this album with a musical operating manual.

The pieces on this album, most of which were written by contemporary, still living composers, come together as a soundtrack for the exploration of Florian Rumpf’s favorite places around the city, as well as for the discovery of historically significant locations. Rumpf provides detailed descriptions of these spaces in the CD booklet.

A sense of freedom is in the air when Florian Klaus Rumpf enters a state of flow during his interpretation of Japanese mandolin composer Keizo Ishibashi’s work. The feeling of liberty is ingrained in the proud character of this wordly hansa town. Following the baroque melodies in Carl Friedrich Abel’s allegro, which was originally composed for viola da gamba, we can embark on an imaginary journey to the early-morning busyness of Hamburg’s famous fish market. The lively accordion sounds in Mark Summer’s Julie O present an excellent ticket to ride on the city’s subway trains, allowing us to study the colorful and diverse people that reside in this city. Fitting soundscapes for more serious chapters of the city’s history are also on this album: Florian Klaus Rumpf dedicates the melancholic piece Remembrance by Masataka Hori to those Hamburgians who were persecuted and deported during the Nazi era.

Employing an acute awareness for lively contextualization, Florian Klaus Rumpf presents himself as a true Hamburg original. For him, string instruments from the 17th century do not need to remain constrained to old music. His album A Mandoline’s Guide To Hamburg demonstrates the cosmopolitanism of this compact, but extremely versatile instrument. Many intriguing bridges are built here not just by Masataka Hori, but also by composers like Chris Acquavella, the Greek composer Victor Kioulaphides, and Raffaele Calace.

A little journey to the origins of jazz concludes the album: My Lady Jazz was written by Albert John Weidt around the year 1920. Originally composed for banjo, it feels right at home in Florian Klaus Rumpf’s interpretation on the mandola (a slightly larger version of the mandolin).

Florian Klaus Rumpf discovered the mandolin at the early age of seven. He later studied at the Hochschule für Musik und Tanz Köln’s Wuppertal location under professors Caterina Lichtenberg, Valerij Kisseljow and Silke Lisko. A pinnacle of his musical career are his collaborations with Avi Avital and Mike Marshall, as well as with the renowned mandolist in the GER Mandolin Orchestra, with whom he performed several shows during the 2011 Singer’s Warsaw Festival. The multitudinousness of mandolin instruments, from the baroque mandoline and the mandole to the liuto cantabile, is the focus of his solistic work. Florian Klaus Rumpf regularly works with composers and adapts pieces in an effort to expand the available literature for these instruments. In 2017, he founded his own music publishing house and label. In 2018, his album BACH. Sonaten und Partiten 1, featuring the first half of the six solos for violine written by Johann Sebastian Bach, was published under the label ARS Produktion. Florian Klaus Rumpf is the first European mandolinist to dedicate himself to the recording of these important compositions.