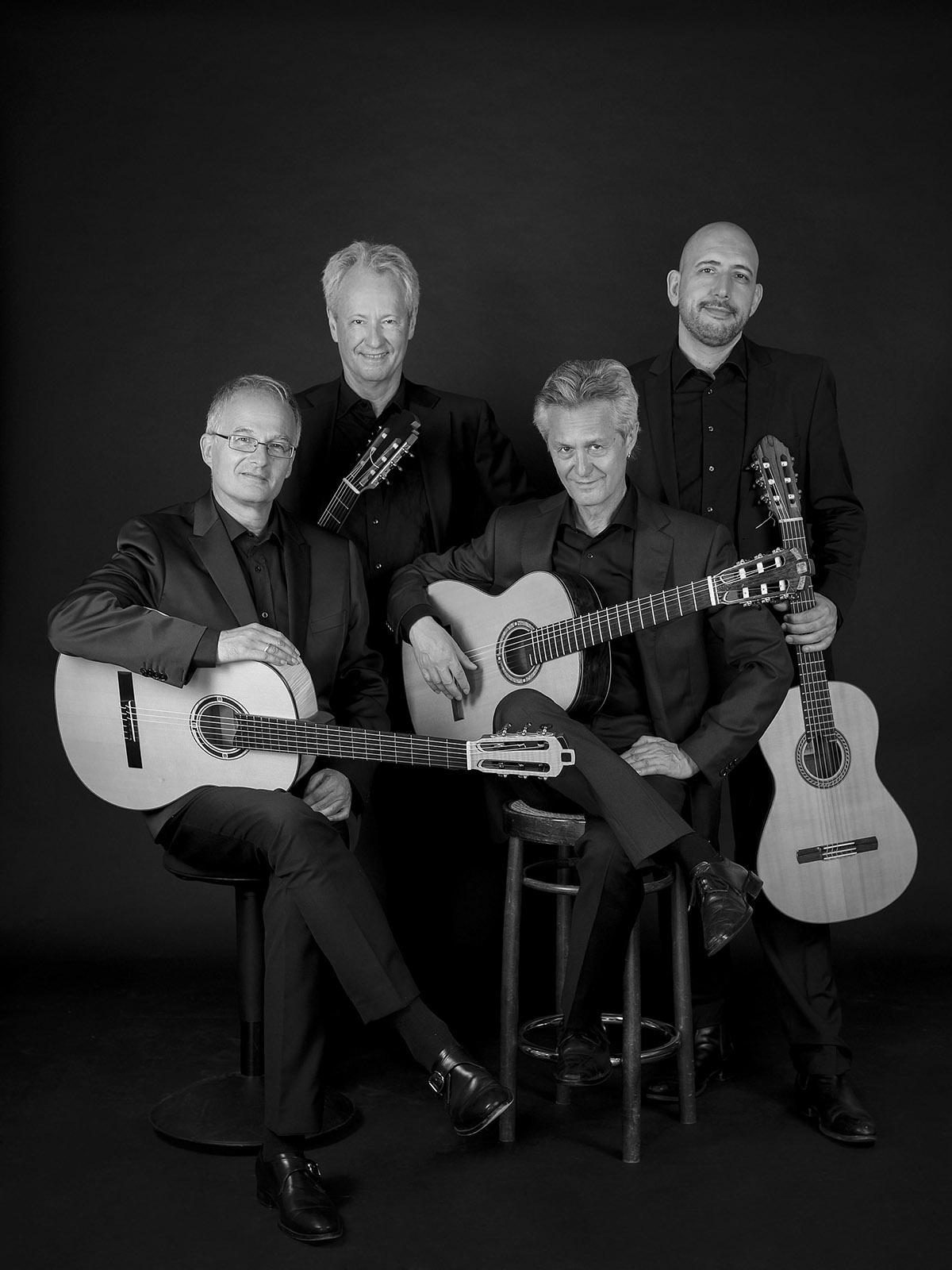 “One of the world’s best guitar quartets” (Leo Brouwer)

Beginning in the 1980s, guitarist Paco de Lucía brought the flamenco in its instrumental, virtuosic variety closer to an audience which up until that point had mostly been listening to jazz and rock music. Forty years later, the Swiss Eos Guitar Quartet presents an homage to the legendary Spanish musician. The “grande dame” of flamenco vocals, Carmen Linares, is featured on two of the pieces. Percussion and rhythmic support is delivered by Ricardo Espinosa. The artistic approach of this new, diverse production is grounded in the present.

The results which can be heard here and which in several cases mark the first time these pieces have ever been recorded, and which are brimming with variety, tell us one thing above all: Flamenco is a worldly, open, musical heritage of humanity: In these pieces, as well as in the impressive playing techniques of the Eos Guitar Quartet, we find a lively togetherness of old traditions, new improvisational techniques, folk music of various cultures, and even classic and jazz. In Flamenco, a single concert guitar can, if played in a virtuosic and spirited manner, move mountains. When the four guitarists of the Eos Guitar Quartet combine their performances in a collective on equal footing, the magic expands even further. At the same time, Julio Azcano, Marcel Ege, David Sautter and Michael Winkler are all expressively individualistic characters, whose objectives find expression in their experimental approach to guitar playing.

The long opening title of the album “El alma de Paco” bears the hallmarks of José Antonio Rodríguez, the great concert guitarist from Córdoba. Right from the start, it opens up room for the delicate playing techniques of the Eos Guitar Quartet. When the musicians call out “Paco!“ at the end, this is a reminder of the atmosphere of Paco de Lucía’s legendary live performances, at the end of which the audience oftentimes excitedly exclaimed the name of this guitar idol. As an exclusive highlight on this recording is featured the unusual voice of “cantaora” Carmen Linares. First in David Sautter’s piece “Aixa, Fátima y Marién,” one of the newly reworked compositions based on a song by Federico García Lorca, Granada’s legendary poet. In the later part of the program, the singer Carmen Linares lifts up her voice once more, this time in a composition by Marcel Ege which is based on the Peteneras “Café de Chinitas,” from the popular book of songs by Federico García Lorca.

Quartet member Marcel Ege created additional new compositions in which he engages with old styles in order to write his Bulerías “Medianoche” and a dance in Seguiriya style with the title “El alba.” Gianvincenzo Cresta and Martin Pirktl – the latter a former member of the Eos Guitar Quartet – applied themselves to a new adaptation of three dances by Manuel de Falla. The Cuban Leo Brouwer has been convinced of the outstanding qualities of the Eos Guitar Quartet for years. In his three-part suite „El quejío del poeta duende – In memoriam Paco de Lucía,” he creates another monument to the guitar legend. While doing so, he also presents further elements of the Flamenco, such as the dance figure of the Fandango, which in turn inspired Luigi Boccherini and Domenico Scarlatti. It is known that both of these Italian composers felt magically drawn to this archaic Andalusian music tradition. In addition, Brouwer’s new piece allows us a re-consideration of the rondeñas, those distinctive features with which Paco de Lucía’s used to begin his concerts.

Towards the end of the program, John McLaughlin expresses his high appreciation for the Eos Guitar Quartet with his composition “Soñando con el sonido,” written specifically for this recording. The British jazz guitarist has been influenced by Indian and Andalusian music since the 1970s. Especially the collaboration with Paco de Lucía made him want to share such influences with the Western audience. With its album “El alma de Paco,” the Eos Guitar Quartet helps to bring about a thrilling new edition of such a widening of horizons.

Eos Guitar Quartet
In 1988, guitarists Marcel Ege, Martin Pirktl, David Sautter and Michael Winkler formed a quartet in Zurich. Shortly after, they chose to name their quartet Eos, after the Greek goddess of dawn. In 2013, Martin Pirktl left the quartet and was replaced by the Argentinian guitarist Julio Azcano. From 2011 until 2014, the Eos Guitar Quartet organized the “InGuitar” festival in Winterthur. The ensemble enjoys an outstanding international reception as “one of the few exceptional formations of its kind” (Basler Zeitung) and performs concerts and festivals in Córdoba, Havana, or Moscow. In 2015, the ensemble embarked on an extensive tour of China. So far, the quartet has released eight recordings. The list of prominent and very distinct musical personalities which have dedicated their pieces to the Eos Guitar Quartet is impressive: among them, Egberto Gismonti, Pierre Favre, Fred Frith, Christy Doran, Ralph Towner, Wolfgang Muthspiel, Sérgio Assad and – last but not least – Paco de Lucía himself.