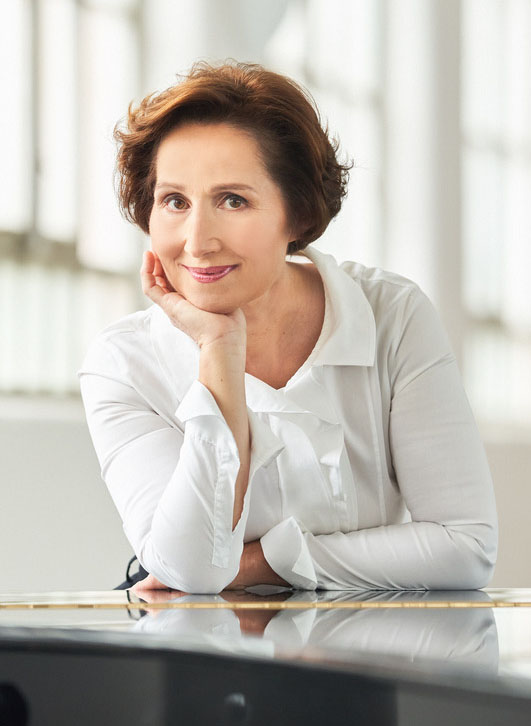 With passion, musicality and a high technical standards, the Hungarian-Swiss pianist Andrea Kauten elicits restrained, poetic, but also very expressive sounds from her instrument. Her highly romantic yet controlled interpretations – especially of the music by Robert Schumann and Franz Liszt’s works for solo piano and for piano and orchestra – regularly earn her ovations from audiences and critics alike. At the same time, Andrea Kauten always knows to surprise and proves her flexibility again and again with her commitment to unconventional repertoire, for example by Hermann Goetz or Karl Goldmark. Her CD debut in 1993 with works by Liszt, Goldmark and Rachmaninov was followed by numerous recordings for Sony Classical and Solo Musica, on which she demonstrates a “superior technique, clever, coherent playing and an enormous flexibility in terms of interpretation” (Pizzicato). She performs internationally in countries such as the USA, Canada, Denmark, France and Germany and, in addition to her concert activities, is the artistic director of the chamber music series of the Anneliese Benner Krafft Foundation in Schopfheim-Fahrnau.

On her most recent recording Promenade, which will be released at the end of April on the Solo Musica label, Andrea Kauten now brings together the Préludes Op. 28 by Frédéric Chopin and Modest Mussorgsky’s Pictures at an Exhibition, two prominent piano cycles that are almost emblematic of their creators’ oeuvre. They stand in the tension between European art music and the national influences of Eastern European and Slavic traditions. While Chopin, rejecting any demonstrative patriotism, manages the seamless integration of his Polish idiom into a universally European expression, Mussorgsky emphatically recalled the folk-Russian, which he offensively opposed to everything ‘Western’. In the juxtaposition, Andrea Kauten shows what unites them despite all the expected contrasts, which goes far beyond some obvious references by Mussorgsky to Chopin’s Préludes.

NO-TE: What was your impetus for putting Chopin’s ‘Préludes’ and Mussorgsky’s ‘Pictures at an Exhibition’ side by side?

Both works have fascinated me for a long time. The appeal of the juxtaposition comes first of all from the aspect of form. They are large-scale cycles based on a sequence of miniatures of partly aphoristic character. In Chopin’s case, this is a progression through the keys, in Mussorgsky’s a gallery visit in memory of his deceased friend, the painter Viktor Hartmann.

NO-TE: What is the attraction of these two cycles for you, what distinguishes them?

Both cycles were written in a biographical phase of life in which the experience of dying was a given. In both works, the composers find their own tonal language. Due to their unconventional use of harmony, these works are today considered to have paved the way for modernism. For me, the emotional and artistic intensity of the works goes far beyond any programmatic reading.

NO-TE: How does that affect your interpretation?

The challenge of interpretation for me is above all to reproduce the deeply emotional content of the works. I perceive them as a walk through landscapes of the soul; as a portrayal of short, gripping and intense moments of feeling in all its facets. For example, in the last of the Préludes, I feel the outcry against the inexorability of fate, including death. It is similar in the Baba Yaga. In Eastern European mythology, her hut is considered the threshold between this world and the afterlife. Here again I feel this struggling and fighting against the fateful.