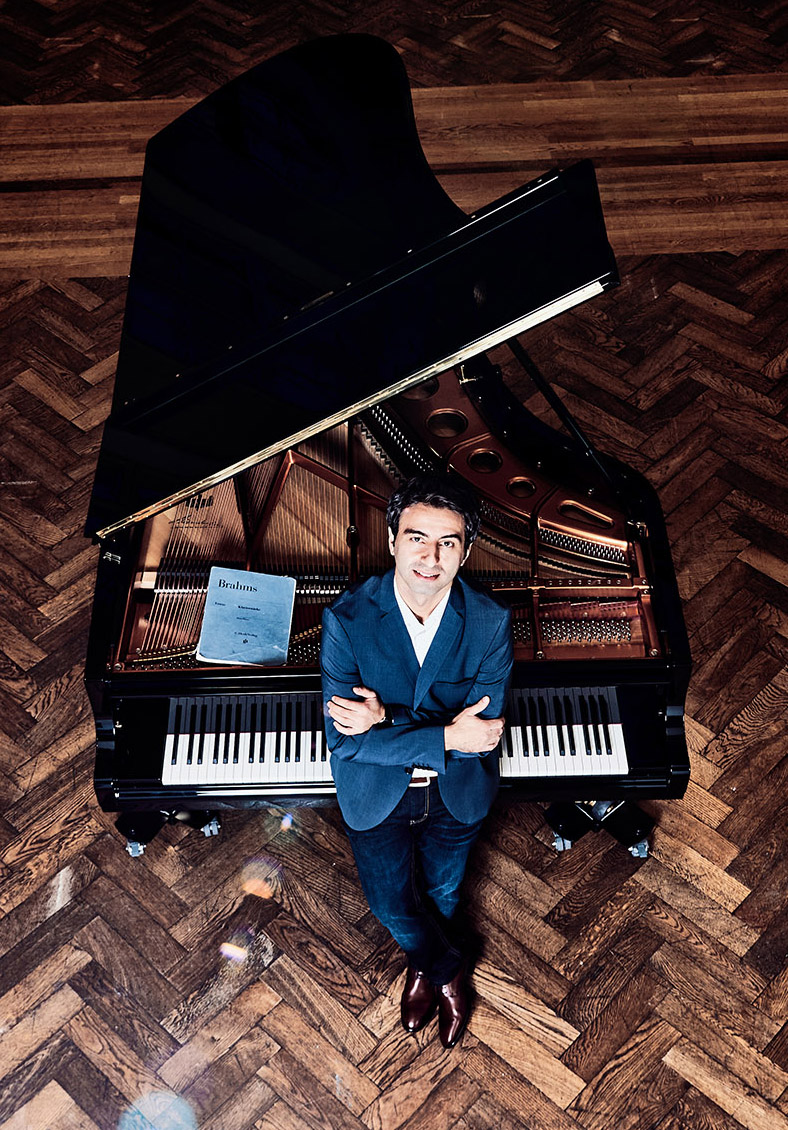 “With his vivid style, he leads audiences through eerily beautiful fantasy worlds of the Romantic.” Kulturzeitschrift

A recording with Wilhelm Kempf was especially eye opening to Yunus Kaya. It is not only the composer’s genius, but also Johannes Brahms’ life that fascinates him. Brahms moved to Vienna in 1872, which is where the Palais Lobkovitz and the Eroica Hall are located. Being able to make a recording here provided further inspiration.

Johannes Brahms composed the twenty fantasies, intermezzi, or simply “piano pieces” in the years 1892 and 1893. At that point in time, it had been 13 years since Brahms had last written a composition for piano. He had long ago freed himself from the formal conventions of Romanticism. The sonata form was history, and he had emerged from Beethoven’s shadow. Instead, Brahms’ tonal language anticipates the gentle, but clear beginnings of early Modernism as well as Impressionism. Only a few minutes in length, these pieces refuse any virtuosity but present an effective tonal depth and density. The death of several people that were very dear to him left a spiritual mark. The first intermezzo from opus 17 quotes a Scottish lullaby about a mother’s mourning for her departed child. In one of the intermezzos in opus 118, Johannes Brahms dresses the age-old Gregorian death motif “Dies Irea” in a pale E flat minor. Many other choral citations are woven through the piece like a red thread. Likewise, Brahms uses polyphony extensively, and all hierarchy between melody and supporting voice appears voided.

In choosing the title “fantasy,” Brahms did not mean to describe fantastic fiction, but rather attempted to take stock of his life in a candid manner. The following “intermezzi” are more than what their title suggests, and are rather independent, complete compositions in themselves. The works opus 118 and 119 bear the austere surtitle “piano pieces,” which points to a modern dictus directed towards the future. In the text to this new CD, Anselm Hartmann draws a conclusion that gets to the heart of it all: “At the end of his life, Brahms the composer once more proves the extent of his mastery. Most of all, however, Brahms the human gives his existential experiences a touching voice.”

Yunus Kaya wants to unearth this complex inner life in our present age. His own artistic approach is strongly inspired by experimental and improvisatory searching. He understands his own interpretations as an open process. Changes are welcomed explicitly. His repertoire is varied and ranges from Baroque to contemporary music. Additionally, it is important to Yunus Kaya to be an agent for Turkish music from the 20th century.

Yunus Kaya was born in 1986 in the Vorarlbergian town of Hohenems and grew up in a bilingual family. He played concerts in numerous European countries, among others at the Salzburg Chamber Music Festival, International Bodenseefestival, and the Chopin society Vorarlberg. As a soloist, he has performed with the Russian Philharmonic Chamber Orchestra “Klassika,” the Symphony Orchestra Vorarlberg, and the Finnish Jalas Chamber Orchestra. He studied at the Vorarlberg Landeskonservatorium under Prof. Ferenc Bognár and at the Mozarteum Salzburg with Prof. Imre Rohmann, completing his studies with honors. In 2008, he was awarded the Bösendorfer stipend. As part of his trio Imago Salzburg, he was a fellow of the “Live Music Now” organization which was founded by Yehudi Menuhin. Kaya received important artistic impulses from Fazil Say, Cristina Ortiz, Rainer Schmidt and Wolfgang Redik. Since 2013, Yunus Kaya has been teaching at the Vorarlberger Landeskonservatorium in Feldkirch, and regularly offers master classes in Italy, Finland, and Turkey.