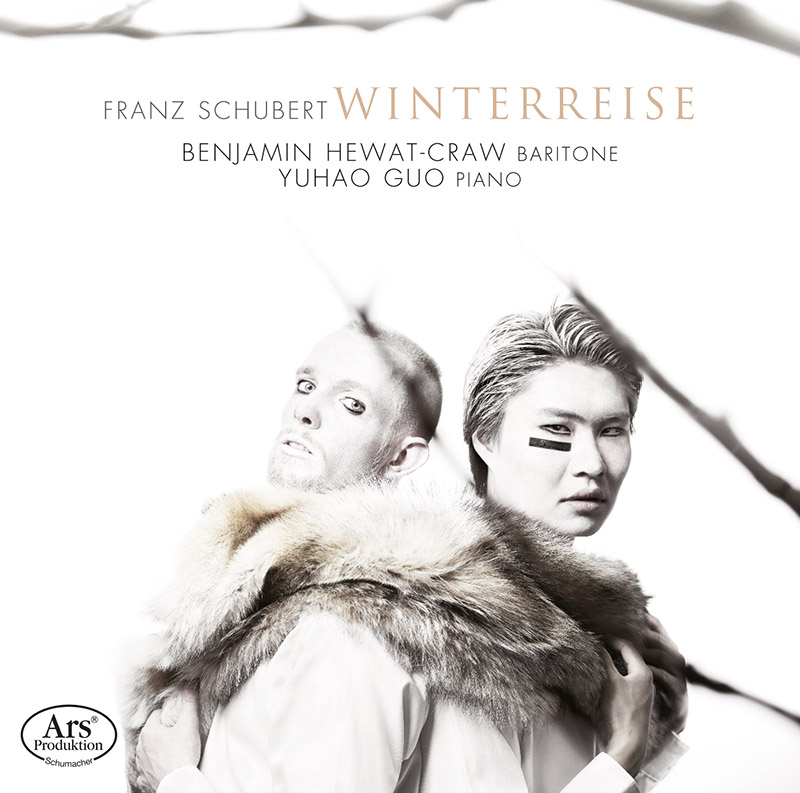 Winter is coming! – and very soon Schubert’s “Cycle of Ghastly Songs”, whose suggestive power fascinates the audience over and over again, will resound in many places. Baritone Benjamin Hewat-Craw and pianist Yuhao Guo have been working together on the Winterreise for years and have performed it several times with great success. For their debut recording, which will be released in September on the ARS Produktion label, they could not have chosen a more substantial masterpiece.

Schubert’s cycle, which he composed in 1828 in the winter of his own life on texts of the Dessau poet Wilhelm Müller, is the epitome of romantic song art. In 24 Passion-like stations it reflects the impressions of a wanderer disappointed by love on his aimless journey through the landscape marked by winter. Wavering between exuberance and despair, the collection is an expression of longing and existential human pain. But as depressing as the subject may be, so wonderful is the music, so masterful the compositional execution.

NO-TE: Why did you choose Winterreise as your debut program?
Hewat-Craw: I don’t believe there is a more iconic song cycle than the Winterreise. We wanted to announce our arrival on the international Lied scene with a bang. It is certainly a challenge with such an iconic catalogue of recordings that have paved the way. Now we have put our own. Each interpretation is so individual but the cycle is enticingly unique. It is an extended epilogue, which delves deep into the human psyche and uncovers loneliness and despair, but possibly a ray of hope. I would challenge any artist not be inspired to explore these themes.

NO-TE: What fascinates people about the Winterreise, despite its gloomy atmosphere?
Guo: I believe to lose yourself in the bleak world of the Winterreise can be particularly appealing. You can discover the depths of the human psyche with the belief that you yourself are positioned safely away from those depths. You (normally) experience the Winterreise in a protected environment with the prospect of returning to normality. Generally people are interested by extreme emotions, and that is exactly that which makes art so special – it awaken these emotions.

NO-TE: What are the challenges of the Winterreise for you as a singer?
Hewat-Craw: I don’t know if there is anything else quite like it in classical music, where a soloist is performing uninterrupted on stage for 70 minutes. It is exhausting not only physically but also mentally, exploring the darker side of the soul for over an hour. I always find it very difficult to go out for dinner after a performance and to return back to the normal world. The performance changes my mindset and takes a while to reset.

Benjamin Hewat-Craw and Yuhao Guo have joined forces as a formation at the Cologne University of Music in 2017. Performances have taken them among others to the Oxford Lieder Festival, the Southwold Arts Festival and the Tonhalle Düsseldorf. English-born Benjamin Hewat-Craw, who belonged to Christoph Prégardien’s class from 2015 to 2018 and is currently studying with Lioba Braun, is not only a gifted art song specialist but also performs the concert and opera repertoire in venues such as the Cologne Opera and Philharmonie, the Bonn Theater and St Paul’s Cathedral. The Cologne pianist Yuhao Guo studied piano with Nina Tichman and art song accompaniment with Ulrich Eisenlohr. As a soloist, he has performed with orchestras such as the WDR Symphony Orchestra, the Brandenburg State Orchestra Frankfurt/Oder and the Duisburg Philharmonic Orchestra, and has repeatedly been a guest at the Ruhr Piano Festival and the ‘Sommerclassic’ in the Castle of Namedy.