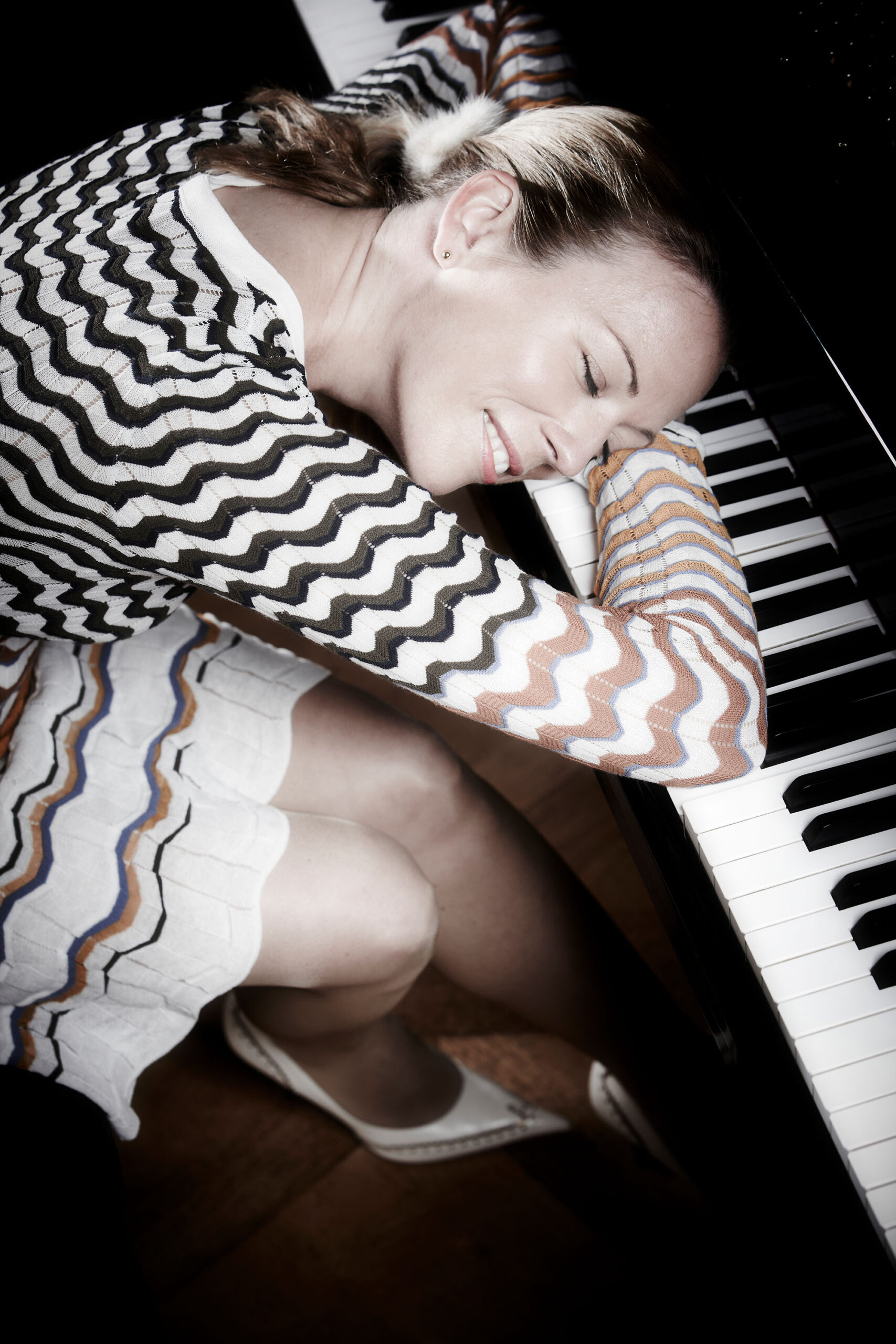 “With her highly differentiated style, Uta Weyand is able to do justice to composers’ idiosyncrasies. At the same time, she is very adept at making stylistic affinities between them visible.” – Klassik Begeistert

For ten years, Uta Weyand lived in Spain, and feels an intimate connection to that country’s culture. On her latest CD, her musical vantage point is drifting further north, to France. But even Ravel’s Piano Concert in G major „Pavane pour une Infante Défunte“ shows a strong Spanish influence. The Nordwestdeutsche Philharmonie (North West German Philharmonics), under the guidance of chief conductor Yves Abel, proofs to be a perfect partner in this recording and completes the program with a piece from Georges Bizet’s early work, the Symphony in C major.

Maurice Ravel’s Piano Concert in G major gets to the heart of this open-minded composer’s self-image. The first movement begins with a whipping sound produced by the percussion section. Later, the finale abruptly ends with a single impulse of the snare drum. All throughout, he subtly interweaves many influences from Paris’ cosmopolitan music scene. Basque and Spanish elements also come into play. Ravel’s tour through America is echoed in the form of jazz innuendos. The opening movement is fast-paced and challenging. The “adagio assai” that follows marks a lyrical, stately antipole when piano and woodwind players enter into a dream-like dialogue. The third movement increases the driving gestus of the opening movement: with even more jazz, and even more tempo – until the whole percussive virtuosity breaks off with a final drumbeat. The reason this music appears so light-footed and never “overly ambitious” is explained by Ravel’s self-proclaimed intention: Ultimately, his goal was to write something entertaining, similar to the manner of Saint-Saëns and Mozart.

Maurice Ravel’s original sources of inspiration for the piece “Pavane pour une Infante Défunte“ remain open to speculation. It is possible that he was referring to a painting by Diego Velasquez Pate, in which a young princess performs the 17th century Italian-Spanish dance called Pavane. The melody, which occurred to Ravel in the year 1899, at first became a piano piece. A historical recording in which Maurice Ravel himself plays this piece survives. But further potential is hidden in this composition. Reason enough to create an orchestral version with harp and flute as the “central characters.”

Georges Bizet only lived to be 34 short years young, but his compositions, especially those for the opera stage, remain immortal. His Symphonie in C major marks an early work which at first sank into complete obscurity. Was this due to the fact that it was a “student project” for Charles Gounod, who was Bizet’s teacher at times? Bizet’s personal style, which later comes into full effect in his operas, is already fully development in these four movements. At the same time, this early symphony provides a thorough examination of classical formal ideals in an effort to develop new future possibilities out of the same.

Uta Weyand studied in Freiburg, Baltimore (among others, with Leon Fleisher) and Madrid (with

Joaquín Soriano). She has worked with major symphony orchestras, especially in Spain, Germany, Brazil, and Cuba, and with renowned conductors like Jesús López Cobos, José Ramón Encinar, Gabriel Chmura, and Jac van Steen. After fellowships granted by the Deutscher Akademischer Austauschdienst (German Academic Exchange Service), Uta Weyand was awarded the first prize at the Steinway Piano Competition in Berlin, and in 1996, the first prize at the José Iturbi International Piano Competition in Valencia with two special awards. Uta Weyand is the founder of PIANALE International Academy and Competition, and she initiated a concert series dedicated to the promotion of young pianists, called “Schlosskonzerte Osthessen” (“Castle Concerts East Hessia”). Incidentally, there exists a direct connection between Uta Weyand and the composer Maurice Ravel: As a “grand-student” of Vlado Perlemuter, who, as a young student, was a close confidant of Ravel’s and was the first to perform Ravel’s complete oeuvre, Uta Weyand feels a special sense of connection to the music of this composer.

Founded in the year 1950, the Nordwestdeutsche Philharmonie has been led by such renown conductors as Andris Nelsons and Hermann Scherchen. Today, the NWD Philharmonie is a versatile orchestra, which has expanded concert culture in the wide region of East Westphalia in numerous locations and spaces. The orchestra shows a record-level of productivity with around 130 concerts per year. Out of such a lively routine grows high artistic flexibility: many soloists value the NWD Philharmonie as a reliable and spirited partner in broadcast productions and CD recordings. In 2021, Jonathon Heyward became chief conductor of the orchestra.

Worked as chief conductor of the Nordwestdeutsche Philharmonie in Herford between 2015 and 2020. As a Franco-Canadian, he feels deeply connected to the Frenche repertoire. In the fall of 2017, he received the Rubies Award of the Opera Canada for his service to opera culture in Canada. Likewise, he was celebrated by audiences and the press for his role as founder and musical director of the L’Opéra Francais de New York, which he fathered in 1988. For this engagement, he was also awarded the “Chevalier de l’Ordre des Arts et des Lettres“ by the French government in 2009. Between 2005 and 2011, Yves Abel was the first guest conductor in residence of the orchestra at the Deutsche Oper Berlin.