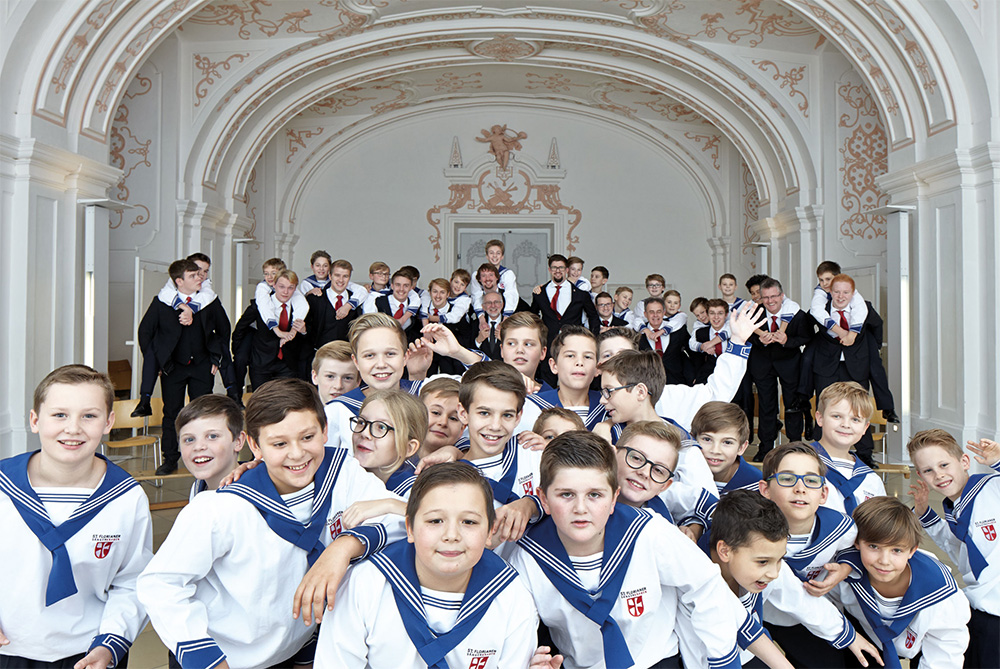 “… absolutely excellent the … St. Florian’ Choir Boys, who … melted vocally together in the highest tonal homogeneity.”(Frankfurter Allgemeine Zeitung)“… and how wonderful it is that Gunar Letzbor chooses … historically correct the fantastic soloists of the St Florian Boys’ Choir! During the Ascension one almost feels the angels nearby…”(BR Klassik)“… tonal accuracy, perfectly balanced and always inspiring dynamics, vocal agility… Every individual was just as much a soloist as a choir singer. ..”
(Fuldaer Zeitung)

950 years – an age as venerable as it is simply incredible. The St Florian Boys’ Choir (St. Florianer Sängerknaben) is one of the most traditional choirs worldwide. Since 1071 it has been performing church music in Upper Austrian Sankt Florian and from there radiates out into the world with its international concert activities in collaboration with renowned orchestras and conductors, a multifaceted repertoire and a rich discography.

Before the end of the anniversary year and to get in the mood for the soon approaching holidays, a new Christmas CD by the Boys’ Choir will be released in October on the ARS Produktion label. Little Christmas contains recordings made under the direction of Franz Farnberger and Markus Stumpner between 1998 and 2021. With pieces ranging from ‘O Tannenbaum’, ‘God Rest You, Merry Gentlemen’ and ‘Jingle Bells’, the CD includes traditional carols and popular classics as well as masterful choral works by composers such as Zoltán Kodály and Max Reger. “Some Christmas Lieder”, says Franz Farnberger, despite numerous new discoveries of Christmas repertoire in his almost 40 years as artistic director of the St Florian Boys’ Choir, “are of course present every year, not only because audience expect to hear them but also because they are simply irreplaceable and represent the essence of the Christmas spirit.”

The St Florian Boys’ Choir has earned an excellent reputation as one of the most traditional boys’ choirs in the world. In addition to the performance of sacred music at the St Florian Seminary and elsewhere, the Boys’ Choir appears worldwide with a wide-ranging concert repertoire alongside such famous orchestras as the Vienna Philharmonic, the Cleveland Orchestra or the Bruckner Orchestra Linz under the direction of renowned conductors as Franz Welser-Möst, René Jacobs or Ingo Metzmacher. Furthermore, the choir and its soloists often participate in opera productions as well as with special ensembles of historically informed performance practice such as Ars Antiqua Austria.

In its almost thousand-year history, countless musicians and composers have emerged from the choir’s ranks, including undoubtedly the most prominent among them: Anton Bruckner, who began his musical career in Sankt Florian as a choirboy and eventually became the organist of the monastery church there.

Franz Farnberger has been the artistic director of the Boys’ Choir since 1983, and Markus Stumpner has held the position of the choir’s conductor since 2018.