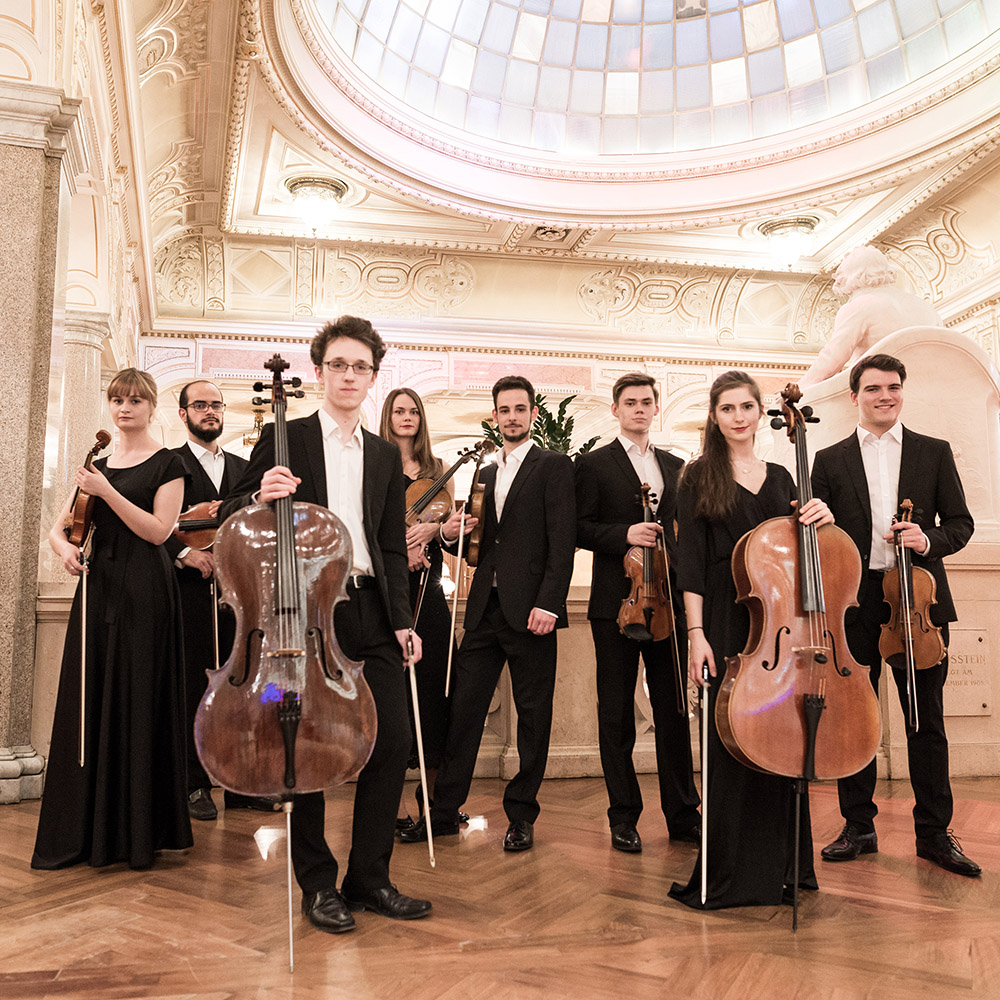 A double string quartet? A small orchestra? The Oberton String Octet falls somewhere in between – a liberating place to be for the charming chamber ensemble from Austria. The eight young musicians are aware of the universality their group constellation brings with it. Effortlessly and smoothly, with a color spectrum as versatile as a chameleon, the string players alternate between musical contexts, switching from classical-romantic string quartet literature – doubled in strength – to forming a baroque choir for clerical music. Eight string instruments work just as well for all the adventures of modernity. But the ‘OSO’ does not stop here: entertaining music genres are not taboo, either. With their interpretations of folk music from various parts of the globe, the octet is appreciated for their role as universal ambassador. The OSO enjoys performing for good causes as much as they revel in celebrations of fiery tangos. On their new CD Slavic Soul, the Oberton String Octet expresses the essence of the album’s title with lifeblood and virtuosity. In doing so, they demonstrate the various reasons for which notable composers favored octet constellations.

Two Pieces for String Octet by Dmitri Shostakovich foreshadows, in a way, the era of the composer’s great string quartets. Was Shostakovich making a tentative approach towards the ‘supreme discipline’ by starting from a small orchestra format, like this octet, in order to then distill the body of sound into its substance? On this CD, the Oberton String Octet demonstrates much more: The two movements do not strike as cautious at all, but instead place the focus on Shostakovich’s main concern. The first piece, Prelude, begins like an Eastern European choral, and then walks the line between elegance and subtle irony. Movement offers plenty of chances for the octet to present all shades of their delicate mobility. But this is only the calm before the storm: Like a breathless ride through hell, the following Scherzo breaks over the players and their audience. Rapid, radical cuts like in a fast-paced film are letting the earth tremble. Rousing tremolos alternate with falling glissandi and semiquavers in the violins. The composer’s hunger for unfiltered expression in adverse times is alive here.
Nikolai Afanasiev studied the historical roots of the ‘string quartet x 2’ genre much earlier. Ensembles with two choirs had already existed in the Renaissance. In the 19th century, they were reanimated by Louis Spohr, before they once again disappeared, as the future belonged to expansion of the symphonic format. Afanasiev, with his 1875 Double quartet in D Major, stays true to the old genre, adding the principal of the ‘concertare’, which describes the dialogue between two groups, into an indulgent, romantic world of sound. The piece, which consists of four movements, shines through its masterful treatment of the string sound and a recourse to Russian folk styles. It offers ingenious echoes between the string groups, and most of the piece is dominated by an optimistic, elated attitude.

Reinhold Glière inherited his name from his German ancestors. His tonal language, however, is conceivably Russian. With energetic momentum, the string players of the Oberton String Quartet reach into this varied sound world, in which a lively contrast between flaming temperament and melancholical contemplation dominates. Here especially, the flowering colorfulness of the strings, who do not only grow together in their organic overall structure, but also present brilliance in their solos, becomes apparent.

Is it due to the programmatic richness or due to the world-encompassing aura of this young octet, which “sounds like an orchestra” (Glas Slavonije), that this group was able to gain international reputation immediately after its founding in 2015? The Oberton String Quartet left lasting impressions with the Musikverein Graz, at the Vienna Music Film Festival in Yekaterinburg, and at the gala concert for the 100th anniversary of the Austrian Republic at the Vienna Hofburg. It also caused a sensation at countless festivals, among others, Steirische Chamber Music Festival, Sounding Jerusalem Festival, the 22nd Music Night of Sarajevo, Euro Chamber Festival in Gdansk, and the opening of the Carinthic Summer in Ossiach, Austria.