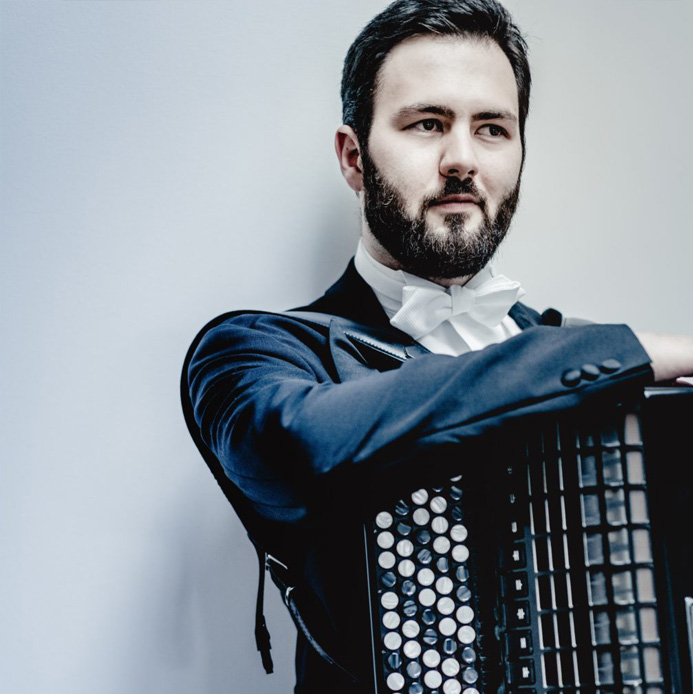 Listen to the album:
https://bit.ly/djoric_bup_pjb

Bach & Piazzolla – two composers who really have nothing in common? The Austria-based Serbian accordionist Nikola Djoric has nevertheless brought them together on one album, creating a soundscape that is thoroughly unfamiliar in the context of Bach. Together with the Kurpfälzisches Kammerorchester (Chamber Orchestra Mannheim) under the baton of Hans-Peter Hoffmann, he has recorded Astor Piazzolla’s famous Concerto for bandoneón, “Aconcagua”, along with Bach’s Harpsichord Concertos Nos. 1 & 7. For him, there was one really important aspect in the realisation of this project:

“We recorded this music using a score faithful to the original; nothing at all was changed, this is not a series of arrangements. I play the Bach and Piazzolla scores one-to-one on the accordion, which gives the listener to hear familiar works in different tone colours. Thanks to its ability to sing and its complexity, the instrument exudes an inimitable allure. Just imagine: a wind instrument that plays polyphonically whether the player is breathing in or out and creates the notes in the air, as it were; a keyboard instrument that can phrase notes in the way string players do with their bows, with two different manuals, over 500 notes, 20 stops and a musician who plays using all ten fingers and can breathe freely at the same time – that is the button accordion: it sings and breathes.”

That “breathing” facility is audible after the first few bars. In the original scoring, the Bach Harpsichord Concerto in D minor BWV 1052, probably his most famous, sometimes seems almost mechanical and rushed. Thanks to the melodious tone of the accordion, the work seems to transform into a Bach aria: full of coloratura and rests to take a breath. That makes the realisation of the two Bach works incredibly vibrant and worth listening to. “Since my first encounter with Bach’s music there developed a sense of purity and trust in his works. I was just six years old then and was playing the Minuet in D minor. Over time, I became better acquainted with its spiritual depths and heavenly heights; I admired its beauty and above all its divine character. It’s no secret: this is music about God and mortals. Bach’s entire oeuvre is highly religious – you hear it in every individual note and in every pause. The special spiritual depth of these works is undoubtedly one of the most beautiful emotions that an artist can experience in music.”

Astor Piazzolla’s music on the other hand is above all about the relationship between nature and human beings. The Bandoneón Concerto “Aconcagua” is adventurous, romantic, melancholy, powerful, human and above all: versatile. Named after the highest mountain in South America, the work employs a tone-painting approach to the accordion’s playing: we see in our mind’s eye the story of an ascent – difficult steps, cold ice under one’s feet, brilliant sunshine, and brief memories of love are the impressions evoked on hearing this work. Piazzolla was very good at “painting” with music – and how else would you paint the highest peak in Argentina than with a tango?