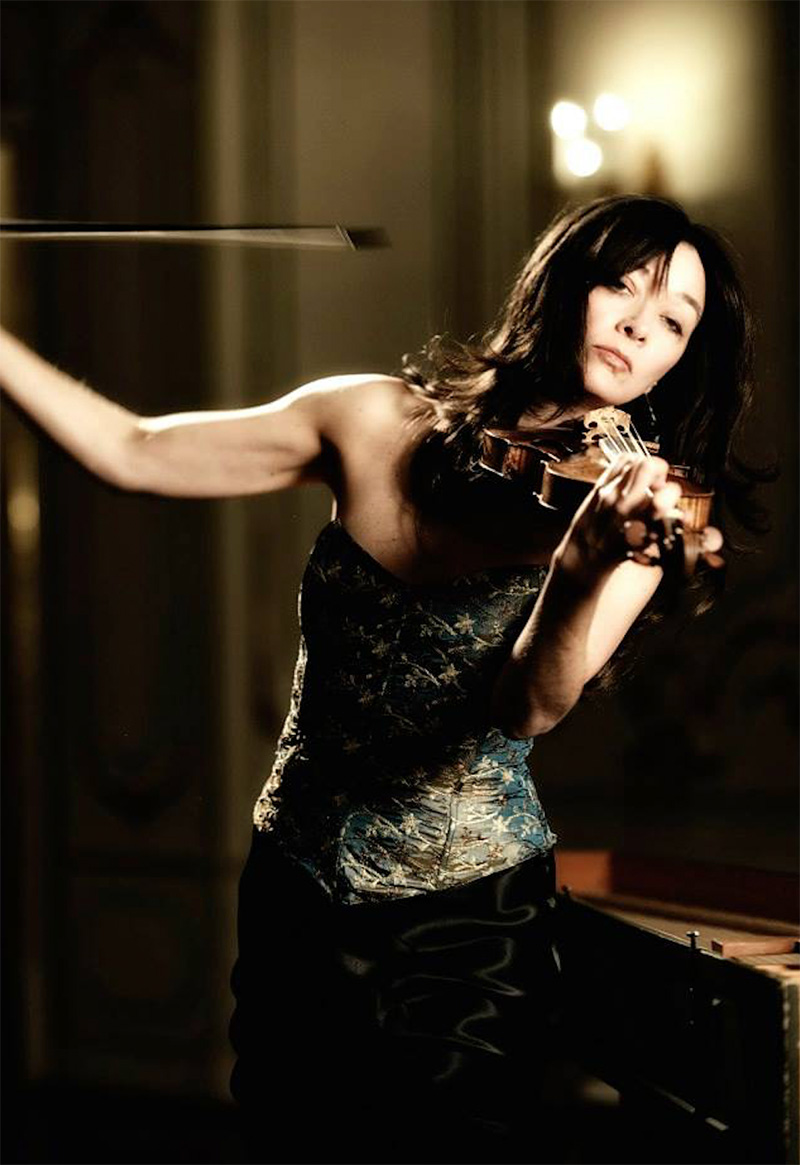 Violinist Lina Tur Bonet dives deep into her artistic themes. In the case of Ludwig van Beethoven’s violin sonatas, this means going beyond getting to the bottom of the score and searching for the authentic sound and the emotional state of the piece. For the CD recording of the sonatas opus 47 (Kreutzer-Sonata) and opus 96, the Spanish violinist has found a soulmate in the Romanian pianist Aurelia Visovan. When the two consistently draw on historical instruments, it has nothing to do with dry archeology.

This is clear to everyone who has had the chance to witness Lina Tur Bonet’s rousing live performances. On this CD, her untamed temperament is especially apparent in Beethoven’s socalled Kreutzer-Sonata.

The sonatas Nr. 9 Opus 47 and Nr. 10 Opus 96 are an uneven pair. But put together on the same recording, they convey the richness of aspects within Beethoven’s gigantic oeuvre. After a baroque-sounding introduction, the concert structure of the sonata Opus 47 calls for a scaling of Mount Olympus – in terms of style, interpretation, and for both musicians alike. The extended variated movement is worked out to its finest. The network of alterations, changes in emotion, and detours is typical for Beethoven and condenses an already pure psychological tension. Ten years later, Beethoven composed Opus 96, his last violin sonata. The sonata marks his later work and acts as a calm anchor after the virtuosic storms of the previous works. Through many cantabile-like, introverted dialogues, it exudes a more “subjective” Romantic spirit.

Lina Tur Bonet and Aurelia Visovan present an enlightened generation of musicians that dares to ask new questions: How must it have felt like when the violinist George Bridgetower, to whom the sonata Opus 9 was originally dedicated, decided to give in to this fresh music spontaneously and without much preparation? A little anecdote as a side note: Beethoven later got into an argument with Bridgewater, and consequently rededicated the piece to a different violinist, Rudolph Kreutzer. The latter name, which was written into music history, was clearly a “stopgap solution.” Kreutzer never played the sonata because it was much too hard for him.

The gut strings which Lina Tur Bonet uses on her 1742 Venetian violin from Carlo Tononi allow for an especially immediate proximity to the primary sources, because, according to her, this brings her closer to “the emotional reactions of the creator, his fire and prose of the inner world.” Aurelio Visovan similarly follows such a confrontation with historical precedents on her grand piano from Beethoven’s time, which she chose for this project. How much does the, from Beethoven himself initiated development of the keyboard instruments, correlate with his decreasing sense of hearing and the resulting desire for more tone richness? It is through questions like these that we can build bridges to the present: “Beethoven’s music somehow manages to still sound shocking and modern even in the year 2020,” the Romanian composer [sic] concludes. This question also interests Lina Tur Bonet when she thinks about the intimate, serene gestus of the late Beethoven sonata Opus 96: “The deafness, his absence from the outside world, has surely let him to dive more and more in his own beautiful and rich inner world.”

Lina Tur Bonet comes from Antonio Tur’s musical family who live in Ibiza. She later studied in Freiburg and Vienna, taught for a long time at the conservatories of Zaragoza and Madrid, and today gave Masterclasses at the University of Mainz and Augsburg. Her previous album “La Belezza,” released in the summer of 2020, also marked a revealing travel back in time to a historical epoch. Here, the focus lays on the rediscovery of rather little-known composers from the early baroque era. Many other projects of all epochs of style have delighted critics and audiences, and they stand for the strong flexibility of this musician.

Aurelia Visovan is known as a comprehensive specialist for anything with keys. She studied in her home country before finishing her diploma in Vienna with accolades. This was followed by master classes in historical performance praxis with Robert D. Levin. Today, she teaches at the School for Music in Nuremberg and works on her dissertation about the sound world of historical keyboard instruments. On the fortepiano and the modern piano, but also on the cembalo, she performs at international concerts and in large concert houses.

1. What is your current job in the field of classical music? (what are you currently working on)

On my music stand there is usually a lot of diverse music; Right now, for the next few months, there is music by Biber, Ravel, Bach, Schubert, Mozart, Vivaldi, Piazzolla, Stravinsky, Beethoven, Paganini, Ysaye and my beloved Seicento music.

2. What were some of your early lessons or experiences in classical music?

My father taught me to read music when I was very young, (2 or 3??) eben before learning to read words, and I started dancing very young, something that I really adored. The Violin arrived many years later

3. What is one of your favorite places and why?

There is a place, a cliff near my family’s house in the old town of the island of Ibiza … it is a place that brings me a lot of peace and inspiration, and I have seen many sunrises and spent many afternoons there walking, reading and listening to music.

4. What is one of your favorite pieces and do you have a favorite performer or experience of it?

to name just one, Monteverdi’s Vespers in Gardiner’s version

5. Is there an artist no longer living who somehow made an impression on you?

6. What is one thing you think will be different about classical music 100 years from now?

I just hope it is listened to with the same naturalness and attitude as the music that is current at that time.

7. What is something about your work that you think most people have no idea about?

I was told I could’nt play violin any more on several occasions, due to various physical problems, fractures and illnesses. I have never mentioned them because I wanted to achieve goals only for artistic merits, but there were numerous problems that interrupted very important moments, which would have allowed me to develop my career much earlier.

8. Did you have any life-changing experiences that put you on the path that led you to be doing what you’re doing today?  Please explain.

Precisely those hard moments made me love what I do even more intensely and work for it with passion when possible. But there is a specific moment, just when I started with the violin, in which a teacher told me that, due to a physical problem in my hand, I could never be a violinist. That made me go home and tell my mother that this was exactly what I was going to do with my life.

9. Is there anything else you would like to say about yourself, your work, or classical music?

I think music, apart from magic, is one of the most useful things that exist in this life. Being able to dedicate yourself to it, both as a professional, an amateur or audience, listening to it or dancing with it, is without a doubt a blessing and a miracle, even for those who do not believe in anything outside these dimensions.

10. Please include something that you would like to promote (link to a video, etc.). You can include a statement also if you like.