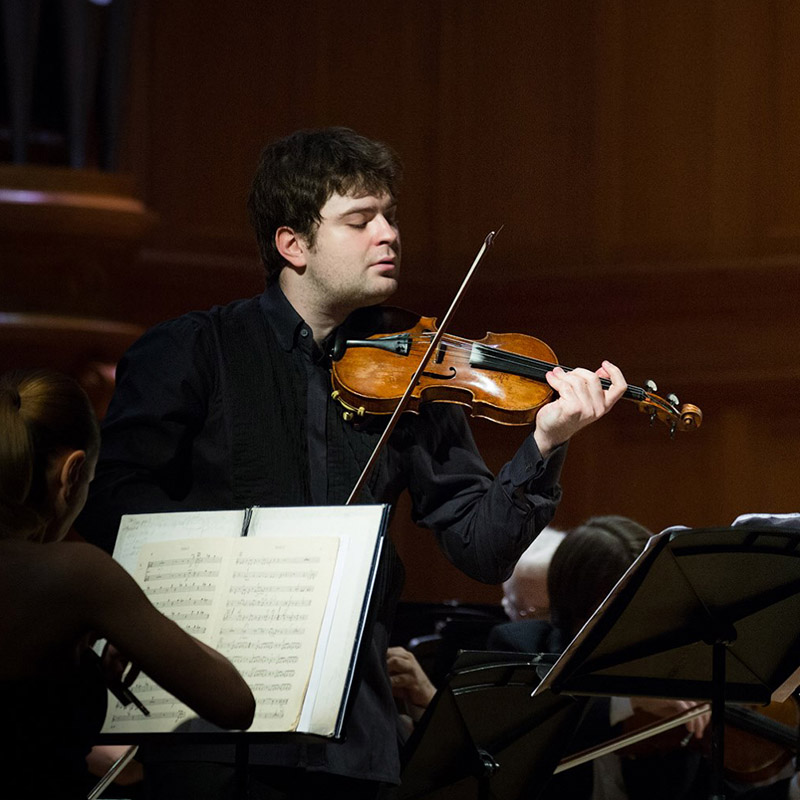 Pyotr Tchaikovsky and Alexander Glasunov each composed only one solo concerto for violin in their lifetimes. But in both of them, all virtuosic possibilities are pushed to the limits.

In a new recording of these two master pieces, violinist Ivan Pochekin meets the Russian National Orchestra. A more high-profile and experienced combination to approach these works with a strong sense of individuality can hardly be imagined.

Pyotr Tchaikovsky’s “Violin Concerto in D major” immediately starts off with a grand gesture. The passionate gestus of this work has led to its becoming one of the most popular repertoire pieces today. At the same time, thanks to its high level of difficulty, it remains approachable only to the best of performers. In fact, the orchestration for the premiere turned out to be problematic because the violinist whom Tchaikovsky had wanted to play the premiere found the piece unplayable. Indeed, the soloists can and must push the boundaries of virtuosic bravura and brilliance, for example through expansive double-stopping passages and playing in very high registers. The fact that the strict Viennese music critic Eduard Hanslick responded to this work with a polemical, damning review is today a mere side not of history. After all, the concerto is now considered a showpiece of concert literature. The Russian soul breathes deeply in this music, but that is only one of its facets. The mix of different stylistic elements is evidence for how much Tchaikovsky – as well as other Russian composers, artists, and authors of his time – were inspired by Western European art and culture. This openness presents significant challenges to the interpretative sophistication of soloist and orchestra.

Alexander Glasunov’s violin concerto is the work of a music fanatic. The complete œuvre of this Russian composer is not very large in scale; yet almost each one of his compositions is considered a masterpiece. This is especially true for his twenty-minute-long A minor violin concerto, which consists of just one movement, though one could also consider it as existing of two movements which are in close relation to one another. Glasunov’s concerto marks a strong contrast to that of Tchaikovsky. While Tchaikovsky’s piece is dominated by a sense of brilliance, the second piece on the program of this recording is dictated by an even more pronounced sense of Slavic melancholy. At the same time, allusions to Brahms and excursions into oriental sonic imagery offer a great stylistic openness and artistic inquisitiveness. Plenty of virtuosic challenges are begging to be mastered.

Ivan Pochekin
“The Russian school provides a technical groundwork – perhaps similar to the athletic world. A high amount of skill and virtuosity is demanded from performers at a very early age. In Germany, personal interpretations were seen as more important. Both systems complement one another.” This is how violinist Ivan Pochekin explained the formula for success in his own artistic vita in an interview with the magazine pizzicato. Born into a family of musicians and violin makers, he took up his violin studies at age five with Galina Turchaninova and Maya Glezarova at the Central Moscow School of Music. At his first solo performance with orchestra, he was seven years young. Later, he studied with renowned pedagogues like Maya Glezarova or Viktor Tretyakov. Since his debut with Prokofiev’s “Violin Concerto Nr. 2,” he has performed in the most famous concert halls of Moscow, St. Petersburg, and other Russian cities. By now, he has long been touring international stages with all leading Russian and international orchestras and conductors. These include orchestras such as the Mariinsky Theater Symphony, the Basel Symphony Orchestra, the State Symphony Orchestra of Russia „Evgeny Svetlanov“ and personalities such as Vladimir Yurovsky, Valery Gergiev and Thomas Sanderling. Ivan Pochekin has produced several recordings for Naxos, Hänssler, Melodiya, PhilArtis Vienna and Divine Art. The repertoire he records varies from classical to contemporary compositions. Ivan Pochekin also plays he viola. Duet performances with his brother, the violinist Mikhail Pochekin, hold a special place in the musician’s artistic endeavors. In 2018, the two brothers created their debut album “The Unity of Opposites” under the label Melodiya. In 2021, he released the Sinfonia Concertante by W.A.Mozart Hänssler Classic with Mikhail and the Stuttgart Chamber Orchestra.

Russisches Nationalorchester
The FAZ (Frankfurter Allgemeine Zeitung) has characterized the Russian National Orchestra as “perhaps the most interesting body of sound of its country;” the British music magazine Gramophone similarly listed it as among the world’s twenty best orchestras. Since its founding, in 1990, by Mikhali Pletnev, the RNO has been celebrated in the international concert halls of Europe, Asia, and America.

In 1991, the orchestra recorded Tchaikovsky’s “Pathethique.” The recording was immediately considered one of the best interpretations of this work that had ever been accomplished. Since then, more than eighty recordings under many renowned labels have followed. A recording of Prokofiev’s “Peter and the Wolf” with Sophia Loren, Bill Clinton, and Michael Gorbachev, directed by Kent Nagano, received a Grammy. A Grammy was also received for a recording of Shostakovich’s “Seventh Symphony” under conductor Paavo Järvi. As a private, meaning non-governmental ensemble, the RNO is unique among Russian orchestras and receives support from individuals and companies from Russia and the whole world. In the year 2010, the orchestra celebrated its 20th anniversary with Gidon Kremer as soloist, with its founder Mikhail Pletnev as conductor.