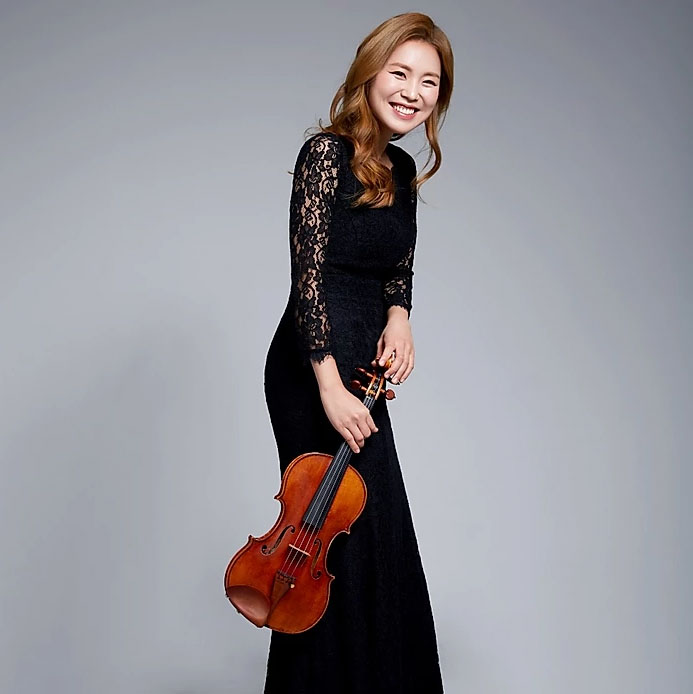 Korean-American violinist So Jin Kim is acclaimed by audiences and the press alike. Critics praise her for both a “flawless, delicate and yet so intense tone” (klassik.com) and the “tonal poetry” (The Strad Korea) of her interpretations. She is an internationally successful soloist performing with renowned orchestras and a passionate chamber musician whose debut recording The Grand Duo caused a sensation in 2018. Now So Jin Kim is releasing her second album, with Wolfgang Amadeus Mozart’s violin concertos No. 3 and No. 5, which she recorded together with the Kurpfälzisches Kammerorchester for ARS Produktion:

“Mozart’s music led me to discover my love for music at a young age. His music has been and continues to be a source of calms, inspiration, and motivation throughout my life and career. I hope that this recording conveys my love and appreciation towards his music.”

Last year So Jin Kim presented the album The Grand Duo with the Genuin label, for which she recorded chamber music works by Strauss, Dorman and Schubert together with pianist David Fung, and which was unanimously celebrated as a “brilliant debut” (klassik.com) and as a “harmonious and musically excellent calling card” (Klassik Heute). For her second album, which will be released by ARS Produktion in January, So Jin Kim now turns to the classical concert repertoire and knows with the Kurpfälzisches Kammerorchester a long-standing ensemble with a veritable expertise at her side. Five violin concertos by Mozart are known today, all of which were composed at a young age within two years – the first in 1773 and the others in 1775. Although it is not certain that he wrote the works primarily for his own use, at least the fact of their performances with Mozart as soloists have survived. “You don’t know yourself how well you play the violin,” Leopold Mozart told his son in October 1777, when his time as an active violin instrumentalist was already drawing to an end. He had just asked for his dismissal from the Salzburg Archbishop’s Orchestra, where he had been concertmaster since 1769. The five violin concertos are the most valuable testimony of these years, and the 3rd and 5th in particular, for example in the surprising turns in the final movements, reveal both Mozart’s originality and his masterly familiarity with the instrument. So Jin Kim studied at the renowned Juilliard School in New York, the Hanover University of Music, Drama and Media and Rice University in Houston, Texas, where she received her Doctor of Musical Arts Degree. She first attracted international attention during a performance at the Lincoln Center in New York and has since performed as a soloist with renowned orchestras in Europe, North America and Asia. The passionate chamber musician counts Jean-Yves Thibaudet, Orli Shaham, Lynn Harrell and Boris Kusnezow among her artistic partners. As an experienced orchestral musician, she regularly holds concertmaster positions in leading ensembles such as the Lucerne Symphony Orchestra in Switzerland and the Munich Radio Orchestra, and has appeared with the SWR Symphony Orchestra in Stuttgart and the Bavarian State Opera in Munich. Since 2016, she has served as the artistic director of Yeosu International Music Festival & Ensemble in South Korea, of which she is the founder.