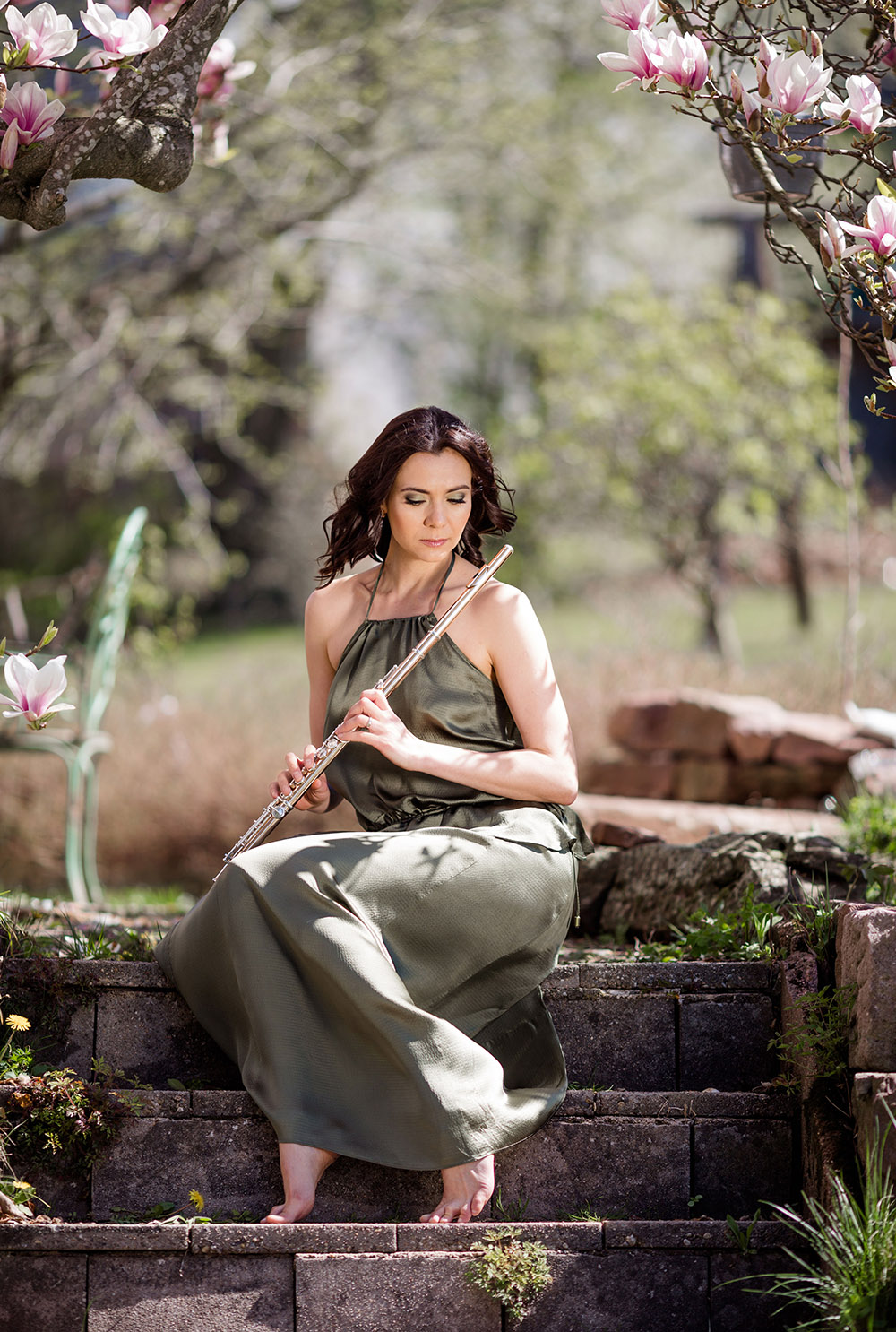 “Quickly, she catches her breath, then begins playing with incredible effervescence. Her mastery of the flute fascinates and carries you along through a world of interpretation, full of personality and intelligence.“ (Regionalzeitung Jekaterinburg)

On her first solo recording, flutist Olga Reiser explores new modes of expression for her instrument. Improvisation and composition, the present and musical history meet. The conclusion: the transverse flute is, after all, much more than simply a brilliant orchestral or solo instrument, but also offers a space for experimentation and a medium of immediate expression similar to vocals.

In Claude Debussy’s works, the sound of the flute turns into a symbolic code. The topic of his piece “Syrinx” is the seduction and love play between the shepherd Pandeli and the nymph Syrinx. The flute serves as medium. Eugene Bozza’s solo piece for flute is a favorite “standard work” for all virtuosos. Such bravura pieces are rare for this instrument. Plenty of onomatopoeic potential unfolds in the im- aginary “Danse de la chèvre” by Arthur Honnegger, written for solo flute. What follows is an adaptation: Olga Reiser takes on nothing less than Niccolo Paganini’s highly virtuosic “Capriccio for Violin.” Not an adaptation, but instead an original is on the other hand Astor Piazolla’s “Tango Etude No.3.” Piazolla had an affinity for the instrument with its “breathing” potential. Here, the flute conjures up the image of a dancing couple. Olga Reiser: “I find it especially emotional and touching that the piece is shaped by a singular lonely instrument.”

On the CD, such interpretations and adaptations are clearly juxtaposed with a more “experimental” section. But music aficionados do not have to worry: an esoteric type of modernism is not espoused by Olga Reiser or the new compositions presented here. Do we find a dialogue between man and machine when Tilmann Dehnhard, in his composition “Wake Up!,” offers an electric alarm clock as a dialogue partner for the flute? This work was originally meant to be a practice piece for the improvement of one’s timing, but Olga Reiser uses it as a basis for creative improvisation.

The character of the delicate transverse flute is very similar to that of the human voice. This aspect can be taken into the direction of pop and hip-hop culture, too. Greg Pattillo’s “Three Pieces for Beatbox Flute” imitates the percussion sounds made not just with mouth, lips, nose, and tongue, but also the orchestral transverse flute, which is venturing once more into unknown terrain.

Those who have had the chance of attending one of Olga Reiser’s extroverted and entertaining solo performances know what is being discussed here. She uses her loop station to great effect, multiplying her performance and thereby creating her own ensemble. This type of approach originates in Olga Reiser’s own composition “For Dad” – an homage to her father. Through this work, she relocates the oldest part of the program on her CD into the present: in her interpretation of Johann Sebastian Bach’s “Minuet No. 2 in G minor,” the work’s roots in classical art music are united with a pronounced passion for jazz improvisation: “With this last piece on my album, I want to build a bridge connecting different eras,” Olga Reiser explains her motivation.

Olga Reiser was born in Norilsk, Russia, and went to music school for exceptionally gifted children in Yekaterinburg. She received her diploma from the state conservatory. After her graduation, she expanded her education with chamber music studies at the state conservatory in Yekaterinburg and additional soloist training at the College for Music in Würzburg, studying under Prof. Hermann Klemeyer. She graudated with a concert diploma.

Her accomplishments have been acknowledged at many competitions. She won the stipend of the City of Yekaterinburg and the Cultural Ministry of the Russian Federation. She also received the first prize at the Wolfgang Fischer and Maria Fischer-Flach- Stiftung for chamber music Würzburg as well as a prize in the Gerhard-Vogt chamber music competition for flute and guitar in Schweinfurt and the international competition for wind instruments in Moscow. She gets invited regularly to international festivals for wind instruments, such as the Festival Edison Denissow in Russia, the International Festival for Wind Instruments in Novosibirsk, and the Rheingau Summer Burghofspiele and the Festival for Modern Music Holland-Russia.