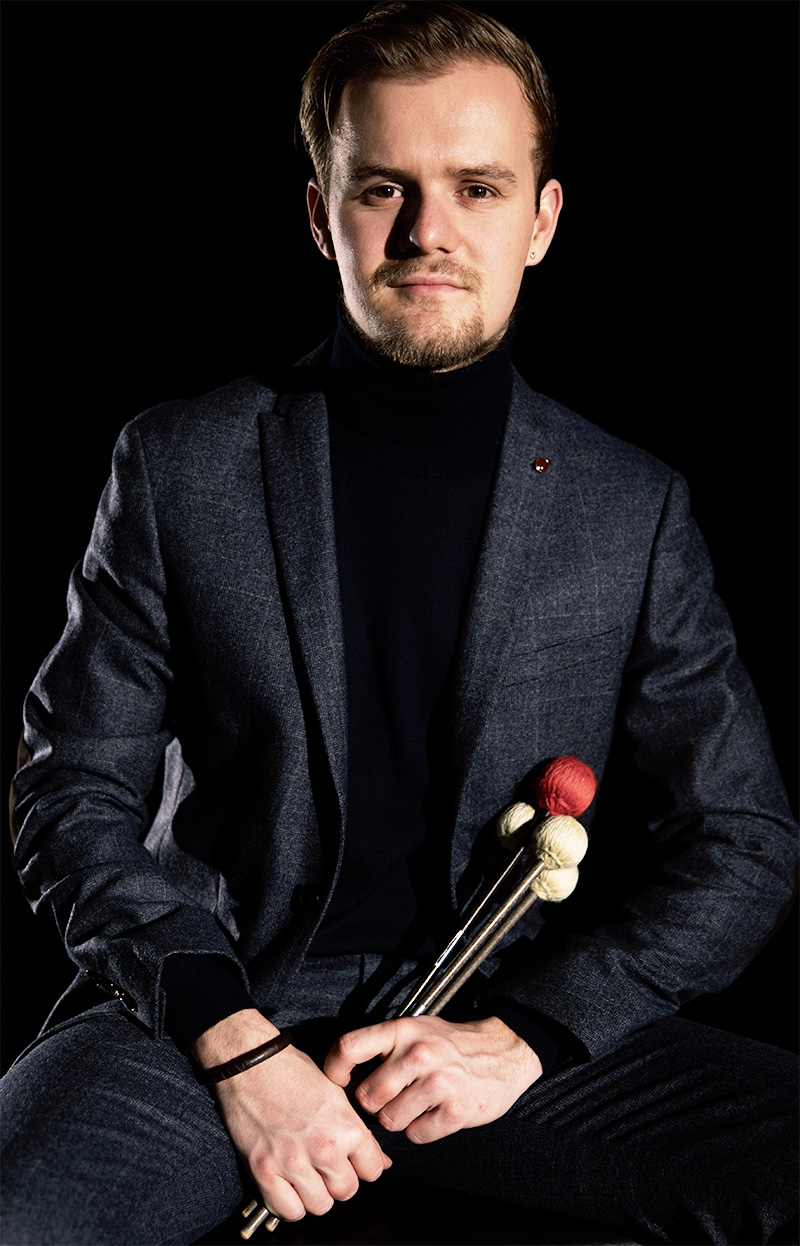 ”Ziegler has fashioned drums, tom-toms, cymbals, congas – and in addition, a ladle and a wheel cap – into a drum set. He is striking a constantly increasing, finally totally wild rhythm before a hurricane of applause releases him from his heavy labor.” – Tagblatt, CH

„Gods, Rhythm, Human“ – the Swiss percussionist Fabian Ziegler’s first CD approaches big themes. The compositions by John Psathas and Iannis Xenakis are inspired by Greek gods and goddesses. The pulsing syncopated rhythms of Steve Reich, on the other hand, present to our ears a classic of this genre. And in the music by John Psathas and Bruce Hamilton, men and machine enter into a dialogue. Fabian Ziegler’s rich instrumentarium, in its center always the vibraphone, lends itself well to a networking along various paths – especially in its collaboration with pianists Akvilė Šileikaitė and Benjamin Engeli, and also with Luca Staffelbach, another percussionist on the Swiss scene.

In ”Atalanta,” the New Zealander John Psathas, son of Greek immigrants, makes reference to the mythological roots of his own heritage. He is fascinated by the approach to fine sounds and repetitive structures. The light-footed virtuosity of the vibraphone underpins the piano and subtly employed electronics. Its deep bass lines, which sounds almost like they could be originating in club music, open up new horizons in this commissioned work. Many solo percussionists count Psathas’ “One Study One Summary” from 2005 among their favorite works: In Ziegler’s reading, this piece becomes at once a highly virtuosic etude and an atmospheric study of sound. Here, too, the synchronization of individual play with programmed structures requires extraordinary prowess.

For the U.S. American Bruce Hamilton, his evident concern is the mixing of what appears to be the irreconcilable. “Interzones” sounds true to its name as it alternates the associative tokens of the vibraphone with added samples. These intermediate zones present us with new tonal abstractions, but also with an improvisatory, even jazzy free spirit.

Such an unacademic conception of the musical present has roots in, among others, North America. This CD includes a pertinent reference to this: Steve Reich’s 2013 quartet for two vibraphones and two pianos. Both instrumental pairs synchronize here towards a pulsating “Über-Instrument.” Compared to Steve Reich’s other works, this polymorphic piece in three movements has an almost symphonic structure. The most radical piece is also the oldest: Iannis Xenakis’ composition “Psappha” for solo drums was created in 1975. Reduced to a few drums and wooden elements, the rhythmic structures emerge from the smallest cells and branch out from there. Here, too, we find a reference to Greek mythology, by which Xenakis was deeply informed: Sappho, the most important lyricist of Greek antiquity, also built tension in her poetry through metric irregularities and displacements. Such a process is carried to its extremes in “Psappha.”

Fabian Ziegler is already part of the first league of concert percussion-artists and was trained, among others, by Martin Grubinger. From 2017-2020, he was Young Artist at the festival of Davos and performed in many international locations such as the Lincoln Center in New York. He often participates in world premieres of renowned composers, such as Christos Hatzis’ “Tongues of Fire” (percussion concert) and Emmanuel Séjournés double concert for vibraphone, marimba, and wind orchestra in the year 2016. (In 2022, new works commissioned by Fabian Ziegler will be produced with the Musikkollegium Winterthur, Orchestra Wellington, and the Christchurch Symphony Orchestra, which will be composed by Arash Safaian and John Psathas.)

Akvilė Šileikaitė (piano) was born in Lithuania and lives in Switzerland. She regularly performs with Fabian Ziegler. In 2015, Akvilė Šileikaitė and the French saxist Valentine Michaud formed the AKMI-Duo, which celebrated its debut in London and has received numerous prizes. Akvilė often performs with the Tonhalle-Orchester Zürich and with other orchestras, and she works with composers like Péter Eötvös, Francesco Filidei, and Matthias Pintscher, and conductors such as  Paarvo Järvi and David Zinman.

Benjamin Engeli (piano) applies himself to chamber music with great enthusiasm and enjoys world-wide popularity. As a member of the Tecchler-Trio, he won the ARD music competition in Munich in 2007. At first, he studied the horn, but soon began focusing on his main instrument, the piano, and learned under Adrian Oetiker at the Musikakademie Basel.

Luca Staffelbach (percussion) is a member of the Colores Trio, together with Fabian Ziegler. Since 2017, he has been studying percussion at the Zürcher Hochschule der Künste. Parallel to his studies, Staffelbach participates in numerous national and international competitions. In 2017, Staffelbach was part of “The Big Six” in Zurich with Martin Grubinger’s “Percussive Planet Ensemble.”