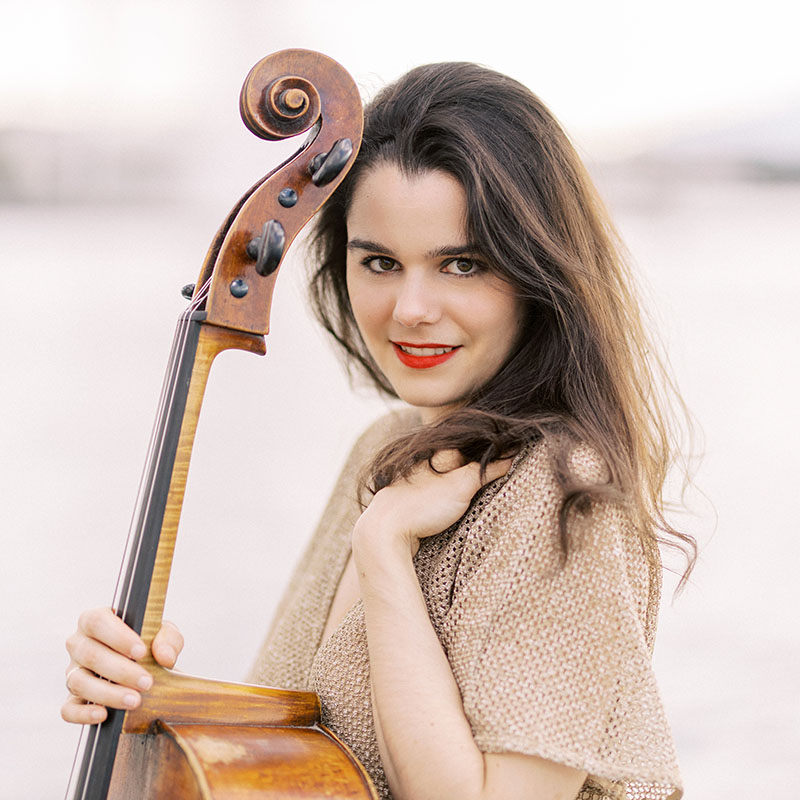 The Swiss Estelle Revaz has earned a reputation beyond the borders of her homeland as an outstanding cellist of her generation. As a soloist and passionate chamber musician, her performances have taken her to numerous countries in Europe, Asia and South America. Her grandiose debut Cantique (Neos), with concertos by Andreas Pflüger and Ernest Bloch, as well as the two solo albums Bach & Friends and Fugato (Solo Musica), on which she proves herself to be an emphatic mediator between tradition and modernity, were enthusiastically received by press and public: “Broad sound, generous phrasing, yet finely chased, clear tempi. Estelle Revaz confirms […] the astonishing musical maturity that makes the cellist from Valais one of the rising stars of a new generation of great performers” (Le Courrier, 2019).

Now, with the album Journey to Geneva (Solo Musica), Estelle Revaz has dedicated herself to a new extraordinary project: together with L’Orchestre de Chambre de Genève (OCG) under the baton of Arie van Beek, she has recorded works for cello and orchestra by the composers Frank Martin and Xavier Dayer. The recording was made as the culmination of her ‘residency’ with the OCG and is an impressive demonstration of the cellist’s as well as the Geneva Chamber Orchestra’s passionate commitment to the music of important Swiss composers of the 20th and 21st centuries.

Since its foundation in 1958, the OCG has vehemently championed the work of Swiss composers such as Ernest Bloch, Frank Martin, Emile Jaques-Dalcroze, Xavier Dayer and Michael Jarrell. Estelle Revaz, for her part, already included concert works by Swiss composers in her debut Cantique and commissioned an original work from Geneva composer Xavier Dayer for her follow-up album Bach & Friends, on which Bach’s cello suites enter into dialogue with contemporary music. As ‘Artist in Residence’ at the OCG, Estelle Revaz and the ensemble now had the opportunity to bring their joint commitment together in the form of the album Journey to Geneva.

With Frank Martin (1890-1974), Estelle Revaz and the OCG dedicate themselves to a Geneva composer who found a highly individual style in the synthesis of conservatism and avant-garde. Both the Ballade of 1949 and the Cello Concerto, written in 1966 for the legendary Pierre Fournier, reveal his quality as an epic lyricist and his differentiated musical language that, as Martin himself affirmed, “ranges from the strictest diatonic to the most complex chromatic writing.”

Commissioned by the OCG and dedicated to Estelle Revaz, the Geneva contemporary Xavier Dayer (b. 1972) composed his cello concerto Lignes d’Est, whose title suggests two aspects. On the one hand, it is informed by the notion “that each instrumental part retains its autonomy and individual progression while inexorably following a particular direction.” On the other hand, it contains allusions of Romanian folklore and “also rings a more symbolic bell in my imagination – as the place of an inner quest implying a meditative dimension.”

Estelle Revaz received her education at the Conservatoire National Supérieur de Musique et Danse de Paris under Jérôme Pernoo and in Germany at the Cologne University of Music under Maria Kliegel. She has made repeated guest appearances at festivals such as the Gstaad Menuhin Festival, the Verbier Festival, the International Festival of Colmar or the Festival Pablo Casals and has performed together with artists such as Renaud and Gautier Capuçon, François Killian, Lena Neudauer or Alexandra Conunova. Since 2015, Estelle Revaz has been a member of the ‘Forum des 100’, which includes personalities considered to be shaping the future of Switzerland.