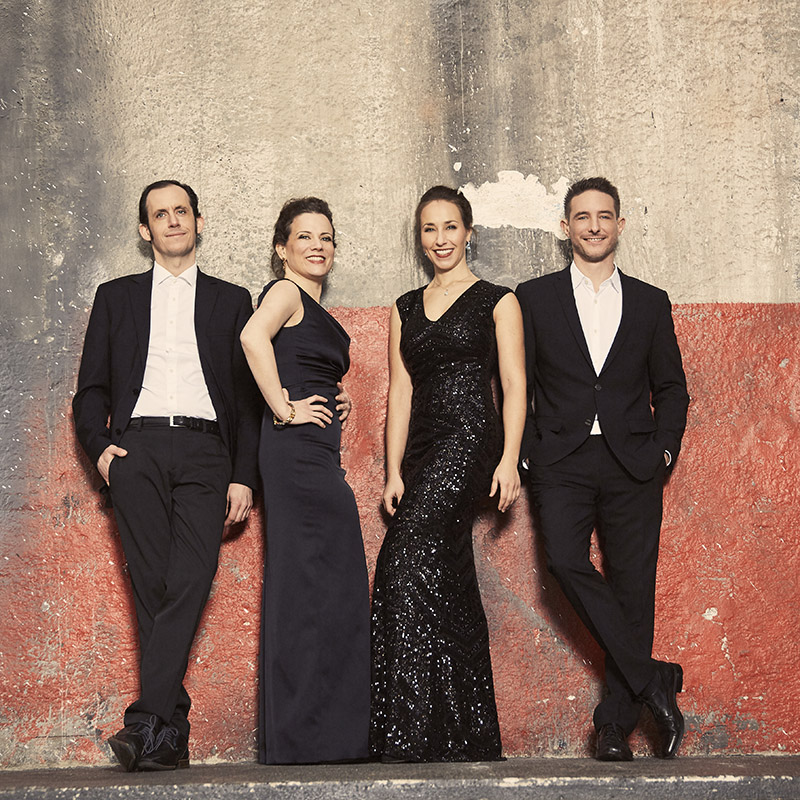 On their latest CD “Intersec#ion” the Ensemble Clazzic embarks on new adventures. “What matters is the content of the music, not its classification. All influences are welcome. It only has to please us or excite us and immediately we start thinking about what we can create out of it,” pianist Susanna Klovsky describes the ambition she shares with flutist Martina Silvester. “Wherever there are boundaries, we instead want to build bridges.”

Many of the baroque, classical, and modernist master pieces would not have been possible had their creators not also been talented improvisors. At the same time, jazz gave birth to many immortal ideas for composition. When something new comes out of this in the music of the Ensemble Clazzic, it accordingly relies heavily on this interpenetration. Pianist Susanna Klovsky appreciates the universality that comes with it: “Ensemble Clazzic can play anywhere. From concert hall to night club.” Their motivation: “We are always searching for new pieces that fit us.” One of their great desires has come true: Namely, to work together with composers and have pieces tailor-made for them.

At the center of their CD “Intersec#ion” lays the “Clazzic Suite,” written by Russian-Israeli composer Uri Brener. Ideas by Debussy, Mozart, Bach, and Stravinsky serve as the raw material for virtuosic improvisations on flute and piano. Conversely, harmonic jazz patterns link up in surprisingly logical fashion with composed themes out of the so-called “e(ntertaining) music,” which often feels like a genius solving of complex mathematical equations. Alex Bayer (bass) and Thomas Sporrer (percussion) help get these time travel journeys and fusions going.

Claude Debussy’s “Syrinx-Suite“ presents at its core a melody which can be interpreted as a nonchalant, cool jazz theme. A leap back in time to the medieval ages is daringly undertaken in the adaptation of a medieval saltarello. The casual, groovy piece “Walkin‘ Bachwards“ is inspired by a polyphonic texture based on Bach’s trio sonata BWV 1039. We wonder what a jam session between Uri Brener and Johann Sebastian Bach would have sounded like? Igor Stravinsky’s Firebird mutates into a Funkybird in the Ensemble Clazzic’s interpretation. The final piece of the Clazzic suite “Amadevans” traces a surprising common denominator between Mozart and Bill Evans: Mozart was a passionate improvisor. At the same time, jazz pianist Bill Evans could be considered the Mozart of piano jazz thanks to his weightless elegance and melodic inspiration.

Martina Silvester
After her classical concert flute studies, Martina Silvester completed a special training in traverse flute. This included the study of historical performance practice – especially improvisations, which became an important influence inspiring the Ensemble Clazzic’s approach. In 2009, Martina Silvester founded the Ensemble Clazzic motivated by her desire to escape the everyday routines of classical music. Since then, she has regularly worked with composer Uri Brener. Her wish to expand other people’s musical horizons is expressed in her many pedagogical projects, such as the Georgian Chamber Orchestra Ingolstadt.

Susanna Klovsky
Since 2015, Susanna Klovsky has been teaching as a répétiteur in prominent vocal classes such as the ones taught by Siegfried Jerusalem. In addition, she collaborates with many artists such as Brigitte Fassbaender, Angelika Kirchschlager, and Michelle Breedt. Her father, who is a jazz musician, has had a formative influence on her. It is he who inspired Susanna Klovsky’s passion for piano improvisation.

Alex Bayer
Bassist Alex Bayer performs in a wide spectrum of styles. From 2001 until 2006, he studied at the
HFM Nürnberg. Since then, he has worked with many internationally renowned musicians in free jazz and improvisational music, such as Mark Dresser, Peter Herbert, Ronny Graupe, Christian Lillinger, and Rudi Mahall. Bayer’s understanding of music is free, contemporary, and outside of all categories and genres. In this manner, he creates music for many band projects.

Thomas Sporrer
Percussionist Thomas Sporrer subscribes to a cosmopolitan open-mindedness: He plays classical music in many different international orchestras, and as a solo timpanist, has performed with the State Opera in Cairo. He is also inspired by Japanese Taiko percussion art.

Uri Brener
After his studies in Moscow, Cologne, Düsseldorf, and Amsterdam – where he learned piano, bassoon, and composition – Uri Brener immigrated to Israel and became the youngest member of the “Israeli Composers League.” He has received the renowned “ACUM Award” several times. Since 2016, he is the musical director of the Mikro Theatre in Jerusalem and in 2017, became director of one of the oldest conservatories in Israel, “Ron Shulamit” in Jerusalem. His music is performed worldwide by prestigious orchestras and ensembles in well-known concert halls.