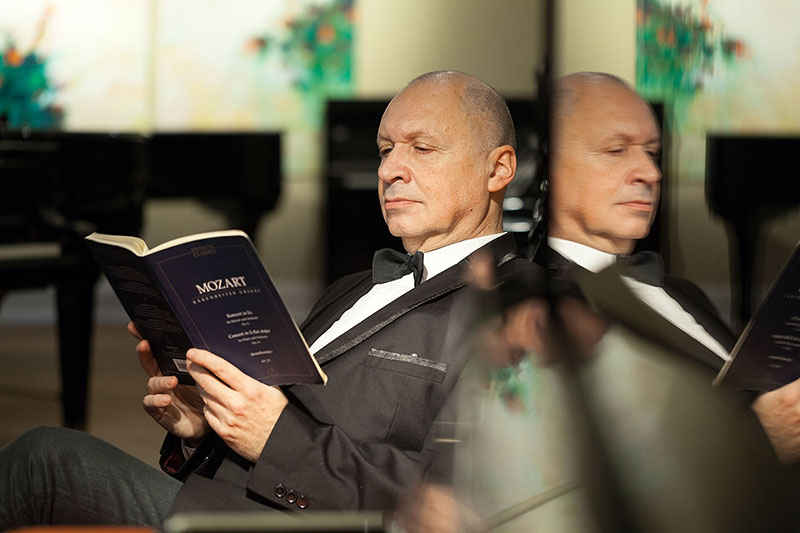 “Boris Bloch belongs to the absolute elite of today’s piano virtuosos and does not have to shy away from a comparison with titans…” (Klassik-Heute, 2019)

Since winning the prestigious Busoni Competition in 1978, Boris Bloch has been considered one of the great pianists of our time. A detailed knowledge of the piano literature of the last three centuries, coupled with a stupendous technique and a strong artistic personality, form the basis of his much praised piano playing, which captivates with its depth of expression, richness of colour and an astonishing sense of style.

In 2011, Boris Bloch began publishing the edition Piano Works with the ARS Produktion label. In ten monographic volumes, the edition is intended to document the cornerstones of his musical convictions and to provide a generous insight into the universe and the impressive art of the pianist. Eight highly acclaimed albums have been released so far, with music by Liszt, Beethoven, Chopin, Mozart, Rachmaninov, Scarlatti, Schubert and most recently Bach. Now ARS Produktion is releasing the ninth volume, in which Boris Bloch devotes himself to the piano music of his compatriot Pyotr Tchaikovsky, including the cycle The Seasons Op. 37bis and a personal selection of piano pieces. In the upcoming year, in which Boris Bloch celebrates his 70th birthday, not only the concluding issue with piano works by Robert Schumann will be released on the occasion of this anniversary, but also a CD box set which combines all volumes and thus offers a complete overview of Boris Bloch’s oeuvre. This box set in a limited number of copies, as well as the individual volumes of the edition can already be ordered exclusively by journalists.

The ninth volume of the edition Piano Works is based on a concert that Boris Bloch gave at the Folkwang University in Essen in 2018 on the occasion of the 125th anniversary of Tchaikovsky’s death. It reveals not only the pianist’s understanding but also his deep affection for the music of the Russian national composer: “When I listen to Tchaikovsky, the beauty, sincerity and simplicity of his melodies touch my soul like no other music. One loves them simply as one would love the dearest person in the world without questioning.”

Pyotr Tchaikovsky’s piano works mostly take a back seat to his achievements in orchestral and stage music. Only a small selection of them has found its way into the repertoire of Western countries. Nevertheless, the composer has left behind an extensive oeuvre for solo piano, containing some highly demanding works. Very popular are especially the romantic character pieces that reveal Tchaikovsky as a master of miniature, above all The Seasons. The cycle was composed in the years 1875 and 1876 on commission of the publisher Nikolay Bernard for his music magazine Le Nouvelliste. He was responsible for the idea as well as the titles and programmes of the twelve pieces, which are based on the months of the year and show a close connection to Russian culture and nature: “Some suspect that Tchaikovsky, even if the title did not originate with him, attached too much importance to the term ‘The Seasons’ as if it had fateful traits. For me, these pieces, especially played as a cycle, are the finest revelations of Tchaikovsky’s intimate lyricism, some of the diary’s most deeply felt entries.”

Boris Bloch, who was born in Odessa, studied at the Moscow Tchaikovsky Conservatory and was a prize winner of several renowned piano competitions. Among others, he won the first prize at the Young Concert Artists Auditions in New York in 1976, the silver medal at the Arthur Rubinstein Competition in Tel Aviv in 1977 and first prize at the Ferruccio Busoni International Piano Competition in Bolzano in 1978. Since then his intense concert activity has taken him to such prestigious festivals as the International Liszt Festival in Raiding, the Beethoven Festival in Bonn, the Ruhr Piano Festival and the Rheingau Music Festival. Boris Bloch has been considered a renowned Liszt expert for many years. For his commitment to his music, he has been awarded the Golden Needle of Honour of the International Liszt Society. His discography includes a number of recordings that acquired benchmark status, especially his recordings of Liszt’s opera paraphrases and the piano works of Modest Mussorgsky. In addition to his concert activities, Boris Bloch has also distinguished himself as a teacher. He regularly conducts master classes and since 1985 he has taught as a professor at the Folkwang University in Essen for many years.