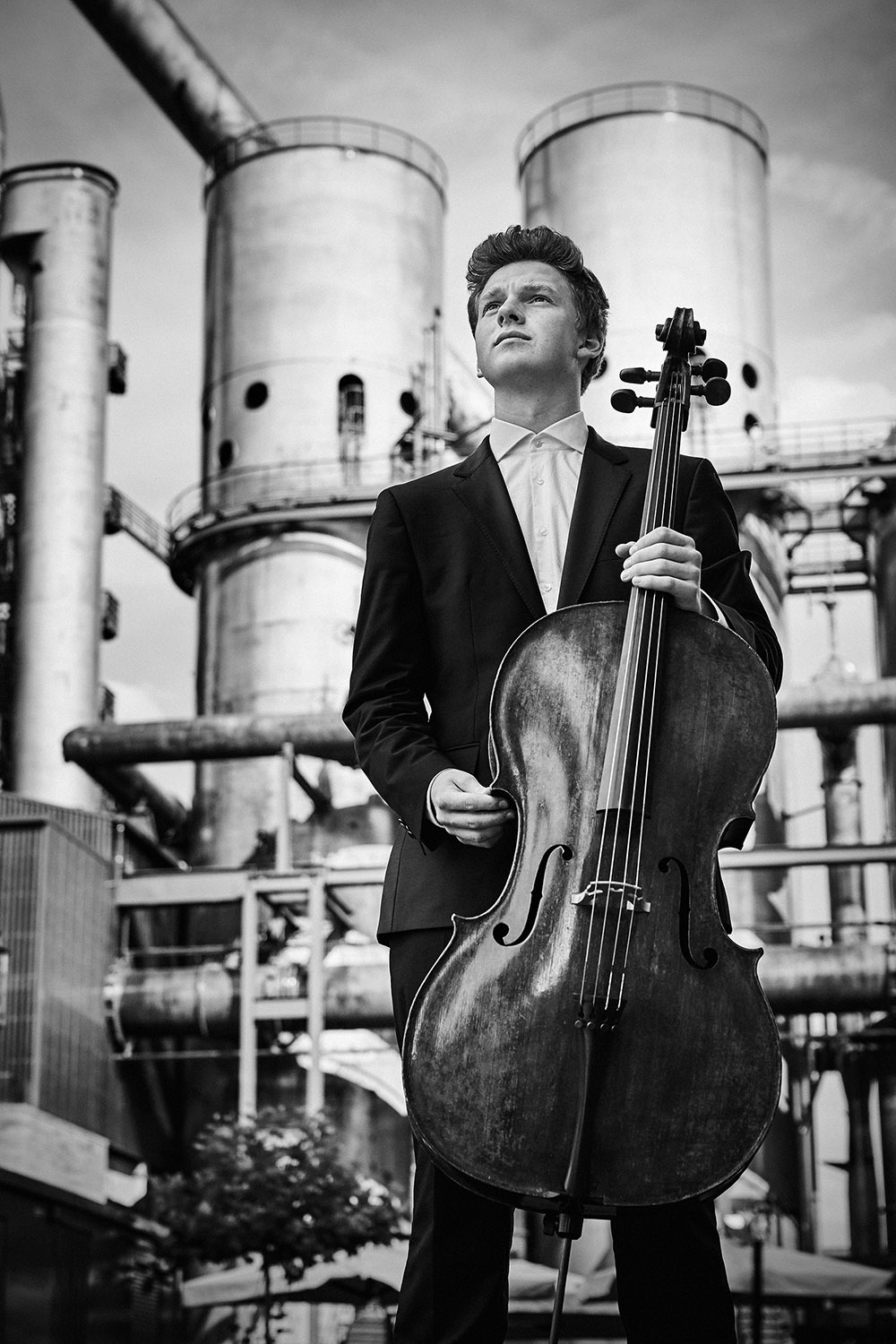 “Benjamin Kruithof is a holistic interpreter who engages with each piece of music with great calm, but also with an extroverted stage performance.”
(Sven Arne Tepl, Chairman of the jury at the Cello Biennale Amsterdam)

One only has to listen to how cellist Benjamin Kruithof plays the first bars of Bach’s G Major Prelude in order to understand musical persuasion. This could be the logical explanation for the fact that the young man from Luxembourg has so far completed nearly every prominent competition with flying colors. His latest coup was his winning of the first prize at the renown Cello Biennale in Amsterdam. He also received the audience award in the same breath. Now he is turning the big wheel on his debut CD: In February 2020, he recorded Russian master works with the Nordwestdeutsche Philharmonie Herford.

Preceding this recording for the label ARS-Produktion was a concert tour with the Herford-based orchestra under the direction of Conrad van Alphen. It shows confidence to choose as the center of a first CD debut a piece of music that is especially challenging for cellists: Pyotr Tchaikovski’s Rococo variations require stylistic command, creative power, and an expansion of one’s own personality as interpreter. This is even the more important because almost all world class cellists measure their talent along this work.

This brilliant “standard” work is smartly placed between pieces that are less frequently heard, thus expanding the horizon regarding Russian music, beginning with Tchaikovski’s graceful “Pezzo Capriccioso” in B minor. And yes – Tchaikovski was a composer of string quartets. The lyrical andante originating in the first quartet in D Major here can be heard as arranged for violoncello and orchestra.

Another discovery is Alexander Glazunov’s “Chant du ménestrel op.71” from 1900. In this piece, Glazunov gets to the heard of that era’s style. As the title suggests, this piece imagines a passion-driven troubadour. Accordingly, the solo cello can revel in all emotional registers. Composter Karl Davidov also had the singing quality of the cello in mind. One of his most masterful accomplishments was the transcription of Fréderic Chopin’s works for solo piano. For his debut recording, Benjamin Kruithof chose the late Romantic character piece “Sunday Morning” from the year 1889. More virtuosic, but no less connected to the “Russian soul” is David Popper’s “Fantasy about Little Russian Songs” opus 43.

When we speak of a singing quality as a desirable quality in a performance, we inevitably must think of a referential work from the early 20th century: Sergey Rachmaninoff’s Vocalise op.34. In the original edition from the year 1912/1915, a vocalist intoned an extensive, but lyric-free line. This later instrumental version allows Benjamin Kruithof to develop thisvocal part on the cello.

Benjamin Kruithof
To Benjamin Kruithof, it is important to share the emotions and thoughts that are part of a musical work with his audience. Among his models are artists like Rostropovich, Glen Gold, and Jascha Heifetz. Born 1999 in Luxembourg, he began studying cello at age five at the Conservatoire du Nord, with Raju Vidali.

In the following years, he studied with Professors like Mirel Iancovici (Conservatory Maastricht), Katharina Deserno (HfMT Köln) and Maria Kliegel (HfMT Köln). Since 2017, he has been a student in Prof. Jens-Peter Maintz’s class at the University of the Arts Berlin. He has competed in numerous master classes and competitions, always achieveing highest placements. International concert tours brought him as far as China, and he has performed concerts in many of Europe’s most important venues.

Nordwestdeutsche Philharmonie
The Nordwestdeutsche Philharmonie is one of the most productive orchestras in the world, especially regarding the 130 (!) concerts which it performs every year with international soloists. Additionally, since its founding in the year 1950, the orchestra has recorded around 200 records and CDs. This year, the NWD Philharmonics received a new artistic lead in chief conductor Jonathan Heyward. Located in Herford, the NWD enriches the concert life of the region of East Westphalia, but also performs internationally, for example in the United States and Japan. Currently, the orchestra is in the news for its new and innovative concept of “audience development.” This initiative for innovative concepts for an “orchestra of the future,” which is structured as an ideas competition, is receiving much attention.