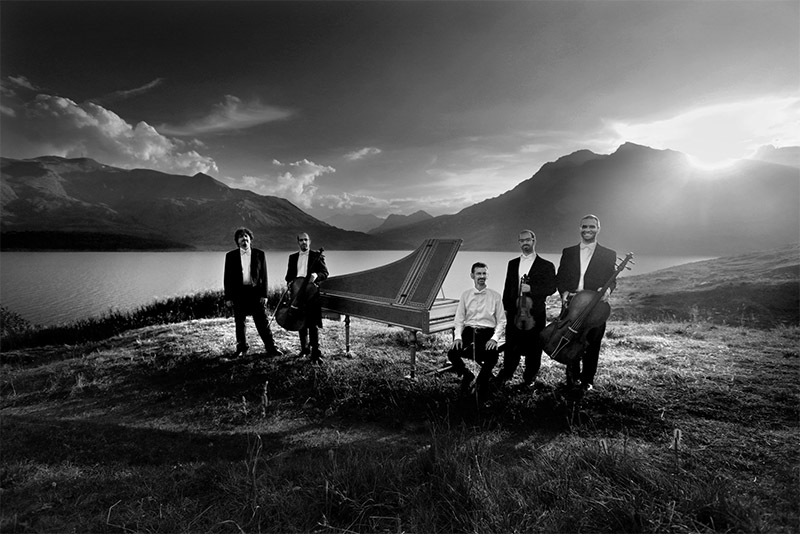 The five-member ensemble around the brothers Stefano and Francesco Cerrato has made a name for itself far beyond historically informed circles. Founded in 2012 in the Piedmontese town of Asti, Armoniosa surprised on their debut album (mdg) with Vivaldi’s concert collection La Stravaganza, which, in the face of the enormous number of recordings, sounds “like a fruit from the various attempts, if not experiments, to interpret Vivaldi over the last twenty years” – a “fresh, powerful and stylistically completely convincing recording” (klassik.com). No less euphoric were the reactions to the following albums featuring trio sonatas by Italian composer Giovanni Benedetto Platti (mdg) and cello sonatas by Carlo Graziani (Rubicon Classics), which received top reviews for their repertoire value and extraordinary interpretation.

Now the five of them turn once more to the music of Antonio Vivaldi and let the style-forming Opus 3 L’estro armonico appear in a new old sound garb! Armoniosa harpsichordist Michele Barchi has revised the concert collection for the ensemble’s special instrumentation – violin, 5 strings cello ‘piccolo’, cello, organ and harpsichord. The result is an almost full orchestral sound that reaffirms the rich expressiveness of Vivaldi’s 12 Concerti. At the same time, Armoniosa’s approach enlivens not only the music, but also 18th-century transcription practice, which found a sheer inexhaustible source of creative exploration in Vivaldi’s concerts.

L’estro armonico was Vivaldi’s first concert release. In 1711 he had it printed in Amsterdam by the renowned publisher Estienne Roger and thus achieved European fame. With its musical quality of concertante energy and cantability as well as the style-forming model of a three-movement setting and ritornello form, the collection influenced the development of the solo concerto even north of the Alps like hardly any other work. On the flutist and composer Johann Joachim Quantz, they “made a not inconsiderable impression on me as an entirely new type of musical piece at the time”. The most prominent example of the effectiveness of the concertos are certainly Johann Sebastian Bach’s transcriptions for keyboard instruments and as a concerto for four harpsichords with orchestra. These also served as models for the transcriptions of this invigorating recording, which despite the arrangement – or precisely because of the sensitive handling of the model – can also be called ‘historically informed’. www.armoniosa.net