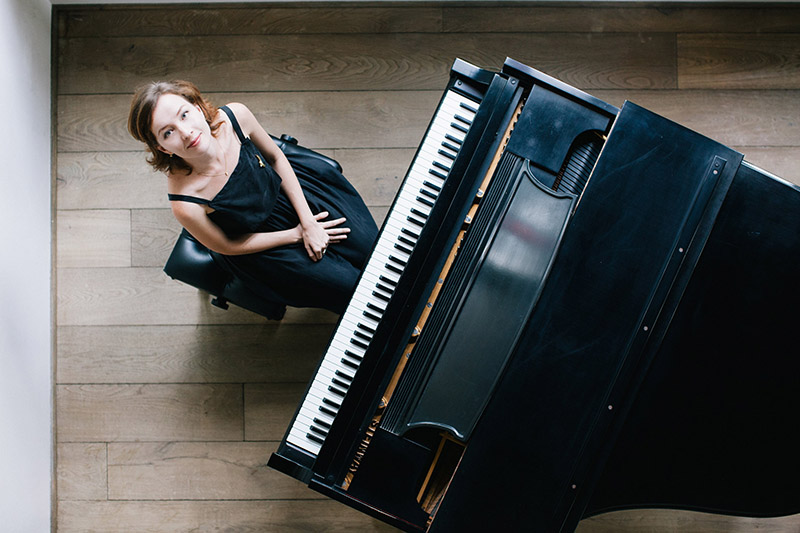 Russian-born Anna Kavalerova has made a name for herself among the pianists of her generation as a cultivated, intelligent musician who is versed in a variety of different styles. Her interpretations bear witness to technical brilliance, emotional maturity and a variable sound palette.

On her debut album Themes & Variations, which will be released in November by Solo Musica, she dedicates herself to three monumental variation cycles from Romanticism to Modernism: Schumann’s epochal Symphonic Etudes Op. 13, a hybrid that goes far beyond a mere movement of variations in its cyclical coherence and its partly symphonic demands; Rachmaninov’s masterly and painful Variations on a theme by Corelli Op. 42, his last great composition for solo piano, and the Variations Op. 41 by the Ukrainian contemporary Nikolai Kapustin, who virtuously combines classical forms with original jazz harmonies and rhythms in his works.

“My debut album features three pieces of the same genre – the Variation. This form of variation attracted my attention because of the way it is structured: a theme that functions as a core and is developed in different ways, in a way that can also be the reflection of how we develop in life. In 10 years I will look at the ‘Anna’ of today, who of course is the same person, with the same core, but with different eyes and different life experiences. It’s also the way we can return to some places after years: the place is still the same, but we have a different view of it – that’s something very exciting about the variation.

The way how the composers deal with the material also fascinates me. All three pieces I play are worked out with different methods and ideas of thematic development. Rachmaninov’s variations are a very dramatic and depressive piece that accompanies you in many places, with forms like the minuet, intermezzo etc., but finally it takes you deeply down and shows the inside drama of human being. Schumann on the other hand is also dramatic and tragic, but in the end he comes to a triumphant march-like conclusion, to happiness and joy in life. Kapustin’s variations are very playful with the material. He does not give the information in the title, but the theme comes from Stravinsky’s The Rite of Spring. He also travels with the theme through different genres, but in a lyrical and playful way. And of course the work is also influenced by his style of writing, the combination of classical forms with the harmonies and rhythms of jazz. So it‘s full of humour and joy of life.”