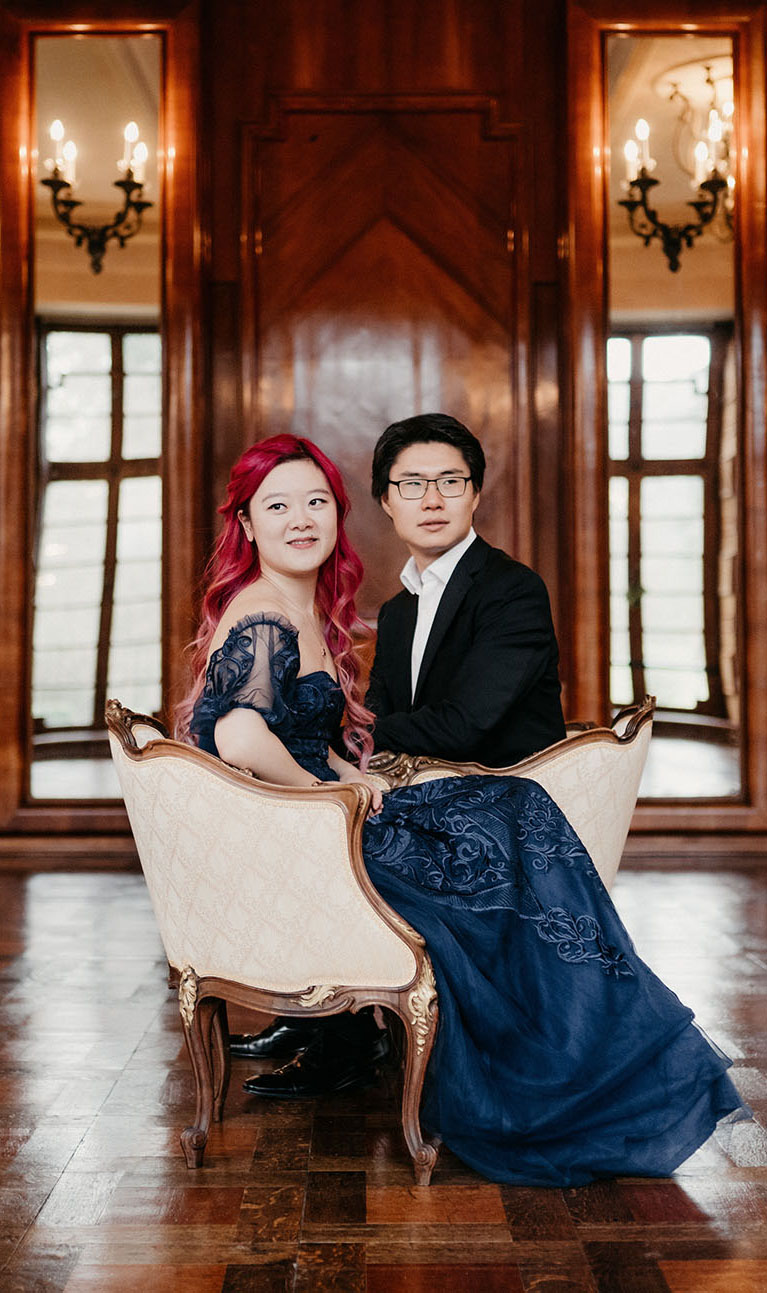 “A declaration of love to the piano!”

In this time without live performances or concerts, it has been quiet in the Alfried Krupp room of the Essen Philharmonic Hall. Anke Pan and Yuhao Guo were thus especially delighted to be able to record their debut CD as a duo on two grand Steinway D pianos in this atmospheric hall that provides outstanding acoustics. Yuhao Guo has composed a suite specifically for the duo, which makes an excellent pairing with the suite compositions by Anton Arensky and Sergei Rachmaninoff.

Creating a common symphonic sound palette on two grand pianos is always a challenge. Anke Pan and Yuhao Gao have bravely undertaken this adventure. The two met at the Pre-College Cologne, an educational center for musically highly talented children and teenagers at the Cologne Academy for Music and Dance. “This is where we met artists of our age with whom we shared our passion and love for music,” the two sum up their time at the school. Sixteen years after their first encounter, a joint musical project has finally emerged out of the friendship between Yuhao Guo and Anke Pan.

Is it a coincidence that Yuhao Guo, Anton Arensky, and Sergei Rachmaninoff all were 27 years old when they completed their compositions that are present on this CD? Plenty of enthusiasm and youthful exuberance is evident in all three suites. Yuhao Guo’s Suite for Two Pianos Opus 30, from the year 2020, feels like a personal resume of his musical experiences. Romantic diction and catchy themes are no taboo. Here and there, traces of musical elements from Guo’s Chinese home country appear, as well as references to Beethoven’s Ninth Symphony. Elements of Waltz and Jazz also pop up before a rousing toccata leads us to the finish line. Guo’s artistry can be found in the way in which he brilliantly weaves together and appropriates these various elements.

Anton Arensky’s tonal language as well sounds like an amalgam of different influences, among them Tchaikovsky, Chopin, and Schumann. Arensky’s Suite for Two Pianos, written in 1888, provides a new, light-footed elegance and often ventures, in entertaining ways, into salon music. Out of plaintive melancholy again and again arise dance-like elements, especially in the lively polonaise in the final part of the piece. If you listen closely, you can make out delicate early anticipations of jazz harmonics.

Arensky had a student that rose to significantly more fame than Arensky himself: Sergei Rachmaninoff. The Suite Nr. 2, op. 17 from 1901 marks an artistic rebirth after a lengthy creative crisis which Rachmaninoff overcame with the help of hypnosis therapy. For Yuhao Guo and Anke Pan, this piece is a declaration of love to the piano. Rich harmonies, symphonically inspired structures, and great contrasts provide an expansive horizon. In between it all lays a fine waltz that presents a rhythmic challenge. The third movement emerges as a dreamy romance. Later, a fiery tarantella leads into a majestic, symphonic finale. There is hardly a better way to show the advantages of two grand pianos over a single one!

Cologne pianist Yuhao Guo studied piano under Nina Tichman and lied/song accompaniment with Ulrich Eisenlohr at the Academy for Music and Dance Cologne. He holds scholarship from the Deutsche Stiftung Musikleben and the Werner Richard-Dr. Carl Dörken-Stiftung. Since 2021, he has been teaching at the Hochschule Osnabrück. As the recipient of first prizes at several competitions, he has performed concerts at the Cologne and Essen Philharmonic Halls, the Tonhalle Düsseldorf and the Festspielhaus Baden-Baden as well as throughout Europe and the United States. He was also a guest artist at the Klavierfestival Ruhr and the festival Sommerclassics at Castle Namedy. Last year, he recorded Franz Schubert’s “Winter Journey” with the British baritone Benjamin Hewat-Craw. The two also won the lied competition at the HfMT Cologne together. With violinist Linda Guo, Yuhao Guo forms the duo atemporale. Additionally, he regularly performs chamber music with violinist Judith Stapf, pianist Anke Pan, and sopranist Katharina Diegritz.

Anke Pan was born in Mülheim an der Ruhr and began playing piano at age four. In 2010, she was the youngest and only German participant at the Chopin competitions in Warsaw. Later, she studied with Pierre-Laurent Aimard and Ilja Scheps, where she continued her musical development. She earned first prizes at the Steinway Piano Competition in Hamburg, the Rotary competition in Essen, the Euro-Asia Festival in Trossingen, the piano competition in Enschede, the Romantic Music Competition in Lancaster, and the Alion Baltic Festival Competition in Estonia, among others. Anke Pan is a scholarship holder at the Deutsche Stiftung Musikleben, Music and Youth Liechtenstein, and the Rotary-Club Aachen, and has received the title of Steinway Young Artist.